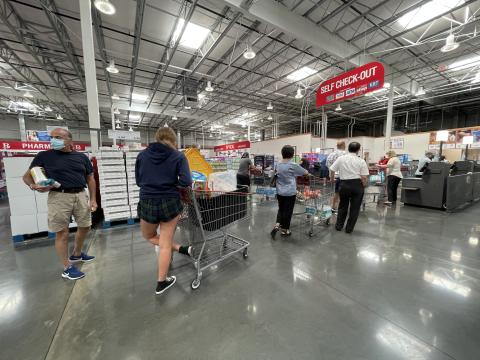 Shoppers stand in line at a Tampa, Fla., area Costco; the Southeast was one of the strongest sales regions in January for the company.

Frozen and fresh foods sales were a big reason why Costco Wholesale reported net sales of $15.76 billion for the retail month of January, an increase of 15.5% from $13.64 billion last year.

In a recorded January sales report, the company said food and sundries sales were in the high single digits during the month, with strong sales in frozen and fresh foods.

Same-store sales were up 9.5% in the United States, excluding fuel and exchange rate effects. Customer traffic was up 7.5%.

Southern California, Texas and the Southeast were the strongest sales regions during the month.

Issaquah, Wash.-based Costco operates 809 warehouses worldwide. The company, which is No. 4 on Progressive Grocer’s 2021 PG 100 list of the top food and consumables retailers in North America, also has e-commerce sites in the United States, Canada, the United Kingdom, Mexico, Korea and Taiwan.