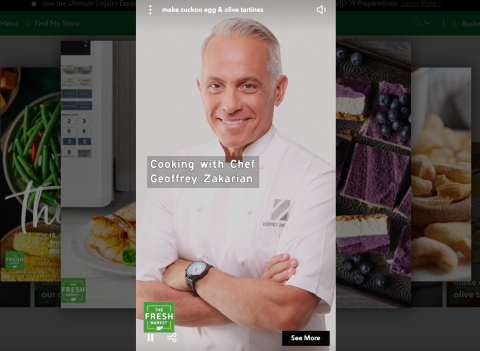 Since the popularity of TikTok has propelled the video platform to become one of the fastest-growing social media channels, it’s no surprise that grocers have hopped on the video bandwagon to capture the attention of next-generation consumers in the online shopping space. The Fresh Market is already seeing success with its partner Firework, a live-commerce and short-form shoppable video platform.

The two companies have revealed a major milestone in their ongoing partnership: Earlier this quarter, The Fresh Market surpassed 365 days of total watch time for its Firework-enabled video content —  including all short-form shoppable video and live-commerce content across the company's owned media channels.

The specialty grocer first teamed with Firework as part of a digital transformation initiative launched in Q4 2021, with the goal of extending its brand's reach for continued growth in the digital-first era. More recently, in March, The Fresh Market revealed a multiphase partnership with Firework, which brought the company's full suite of live-commerce and short-form shoppable video capabilities to The Fresh Market’s owned media channels.

"Video is the new lingua franca of next-generation digital consumers," said Jason Holland, president and chief business officer for San Mateo, Calif.-based Firework. "With Firework, forward-looking brands like The Fresh Market are able to translate their own identity and messaging into this new, universal language with the fluency, ease and authenticity that resonate with these audiences and keep them engaged."

Leveraging shoppable video, livestreaming commerce and  monetization capabilities, Firework empowers retailers, consumer brands and publishers to build engaging video experiences on their owned and operated digital properties and across channels at a global scale. According to the company, it enables organizations to bring new levels of authenticity and connection to online video experiences, speaking to digital natives in a language they understand fully — and taking control of their own customer data. Firework has raised more than $235 million in capital to date.

"A differentiated customer experience has been integral to The Fresh Market's identity since our founding," said Kevin Miller, chief marketing officer at The Fresh Market. "With Firework, we've finally been able to replicate those premium customer experiences in the digital sphere — and based on the response from our customers, it has been a resounding success. What we've been able to accomplish with Firework in such a short period of time has been nothing short of transformative."

Greensboro, N.C.-based The Fresh Market operates 160 stores in 22 states. It is No. 78 on The PG 100, Progressive Grocer's 2022 list of the top food and consumables retailers in North America. In May, Chilean supermarket operator Cencosud revealed that it was acquiring The Fresh Market.