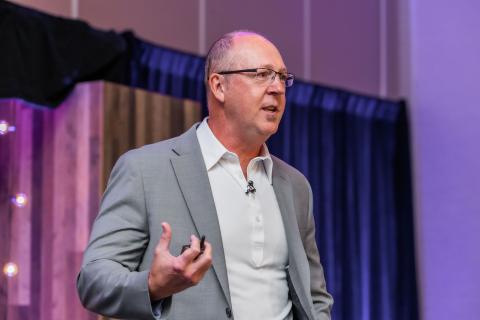 Top leaders from every corner of the grocery industry gathered in Orlando this month to attend Progressive Grocer's Grocery Industry Week.

More than 600 attendees traveled to the Hyatt Grand Cypress Resort in Orlando, Fla., to attend the sold-out summit, which consisted of GenNext: The Future Leaders Forum (a celebration of the most promising emerging talent in grocery); Grocery Leaders Executive Forum (thought leadership from senior executives on the major issues post-COVID that have affected grocery); Retailer of the Century Awards (a celebration of the food retailers that have had the greatest influence on the industry over the past century); and Top Women in Grocery (the most prestigious honor for female leaders in the grocery industry).

Lowes Foods President Tim Lowe kicked off the Grocery Leaders Executive Forum with an inspiring presentation on why grocers need to get into the entertainment business, especially post-pandemic.

Kroger CEO Rodney McMullen participated in a bonus session of the Grocery Leaders Executive Forum, in which he explained the reasoning for Kroger's merger with Albertsons. He said he prefers the term “merge” to the idea of an “acquisition” because both companies have something to offer the other.

“You’ll never hear me use the word acquire. To me, it’s about merging and bringing out the best of both companies,” McMullen said. “As long as we’re humble enough, I guarantee you there are a lot of things that Albertsons does better than us. Hopefully we’ll find some things that we’re better at, as well. Together we can create something that neither party can do individually.”

Witherspoon also appeared at the Grocery Leaders Executive Forum, where he talked about his first year as CEO of Shipt. Witherspoon said his first priority has been to immerse himself in insights from the company’s stakeholders: from customers to retail and brand partners to employees to the independent contractors who work on the Shipt platform.

Meijer VP of Fresh Lynette Ackley was also inducted into the Top Women in Grocery Hall of Fame.

To see photo galleries of the events, click here and here.

Progressive Grocer will hold its next Grocery Industry Week next year in November at the Hyatt Grand Cypress in Orlando.