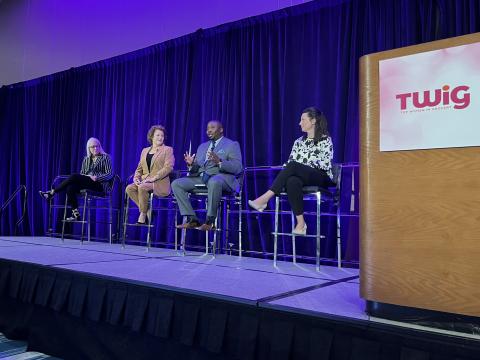 Grocery Industry Week rolled on Thurs. Nov. 3, and Progressive Grocer welcomed hundreds of Top Women in Grocery honorees to Orlando, Fla. To kick off the Leadership Development Program running concurrently with the TWIG awards, NextUp President and CEO Sarah Alter, along with several grocery leaders, took the stage to discuss diversity, equity and inclusion (DEI) initiatives and the need for allyship.

Creating DEI-based company culture can be easier said than done, Alter explained, but promoting true allyship and building a culture where people can have real dialogue spanning different perspectives can make all the difference. When it comes to bringing DEI to life, LaDonna Hale, VP of sales and business development for Albertsons Cos., explained that her company recently launched a “Living Our Purpose” initiative that goes beyond standard cookie-cutter campaigns.

[Read more: "Why Grocers Should Get Into the Entertainment Business"]

“What we’ve done is created a bottom-up organization within our organization that says ‘here are the views that are important to us,’” Hale explained. “This group of individuals landed on eight core values, and of the eight, so many are tied to diversity and inclusion.”

Kevin Lindsey, regional director and HR business partner for The Kroger Co., leads the grocer’s “Framework for Action” that encompasses five pillars, each of which has two action steps including things like creating a more inclusive culture and developing diverse talent. One of the most important pillars, Lindsey explained, is around continuing to listen and reporting progress to associates.

When it comes to allyship, Lindsey said he believes diversity, equity and inclusion have always been woven into the fabric of Kroger, but that the company has become more laser focused on growing the practice. “When I think about allyship, a lot of that, to me, comes from experience and just being intentional about being an ally,” he said.

Stephanie Schepp, chief of staff and portfolio management for Ahold Delhaize’s Retail Business Services, said the company has been very thoughtful of allyship while evolving its diversity programs in recent years. While the retailer’s business resource groups are meant to be safe spaces for associates to find connections and relationships, the groups have been intentionally branded as “BRGs and Allies” in an effort to encourage employees to join those groups and support and learn more about the people within them.

“The more of that we do as an organization, the more diverse we’ll be, but of course the better and more effective organization we’ll be, as well,” Schepp said.