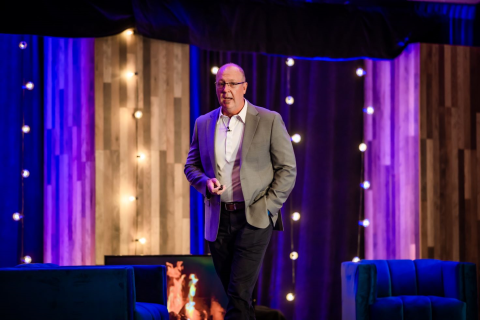 If the pandemic was a disruption and the ensuing period can be described as chaotic, what’s a grocer in a business with already-slim margins to do?

Tim Lowe, president of Lowes Foods, LLC, shared the ways in which his retail business has redefined itself and simultaneously given shoppers what they want and need. During the Nov. 3 opening session of the Grocery Leaders Executive Forum at Grocery Industry Week in Orlando, Fla., Lowe underscored the importance of small data that often holds big revelations. “A lot of times, the details are in the small data and there is a lot to be learned from that. What is the consumer telling you?” he asked.

Consumers were telling Lowes that they wanted more out of their jaunts to the grocery store, something that the leaders and team took to heart. “We thought, ‘How do we create an entertainment company that intersects with consumers around food?'” Lowe recalled.

He shared several examples of ways in which Lowes transformed its model to become an entertainment company that creates food experiences.

First, he stressed the importance of going where others have not gone or do not want to go. Lowes did that by creating entertainment around its fried chicken offerings, from tapping employees to dress up and do the chicken dance in stores when hot chicken was ready to installing animatronic chicken-themed chandeliers that played chicken dance music. As a result, chicken sales got a strong lift and the program took on a life of its own on social media and among loyal shoppers-turned-avid-fans. “We were not living in the status quo,” Lowe noted.

In addition, heeding Lowe’s notion that “normalcy will kill you,” grocers can make small but powerful changes to impact their business, he pointed out. That was the idea behind moving the process of cutting fruit from a closed-off food prep area to a public space that promoted freshness, service and personalization. “We were already doing it and paying the labor cost, so we might as well show the consumers what we are doing,” he explained, adding that customers can also pick their own fruit from the produce department and bring it to the visible prep station where associates portion it for them while they do the rest of their shopping.

In a similar way, instead of just propping up signs that the bakery was offering hot fresh bread, Lowes added a bell feature and a chant that cascaded throughout the store whenever bread was pulled from the oven.

Another example Lowe shared was the grocer’s creation of experiences built around the beer buying and drinking experience. As nice as a reset of the beer area looked, Lowe challenged his team to create a built-in growler station where shoppers could fill and take home beers from taps. Building on the success of the subsequent Beer Den – and reflecting the tenet of “keep moving” – Lowes added beer and wine pours by the glass, built in-house breweries and brewpubs and launched “The Hunt Club” program in which members join the retailer’s beer experts to discover new local craft beers and meet up with fellow beer enthusiasts. “Now, we have someone whose sole job it is to manage this loyalty program – and it is a loyalty program,” Lowe said.

Ultimately, by devising entertainment experiences that provide consumers with an “epic foodventure,” retailers can give people what they want and crave. “Consumers are saying now that experiential elements are more important than they have ever been before,” Lowe said, adding, “My challenge to you is to remember the chicken and go to places where others refuse to go.”

A wholly owned subsidiary of Hickory, N.C.-based Alex Lee Inc., Lowes Foods LLC employs approximately 9,000 people and operates more than 80 full-service supermarkets in the Carolinas. The company is No. 65 on The PG 100, Progressive Grocer’s 2022 list of the top food and consumables retailers in North America.