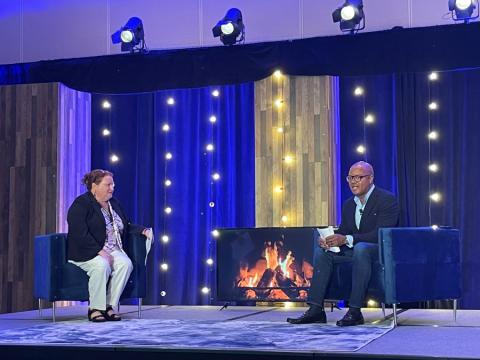 Five years after Target acquired Shipt, the company has a new CEO and a new strategy: doubling down on the people-first values that make Shipt distinct.

“Our vision anchors into us being distinctly Shipt and doing things that only we can do – because of our values, because we are a people-first company,” he said.

After joining Shipt as CEO in March of this year, Witherspoon says his first priority was to immerse himself in insights from the company’s stakeholders: from customers to retail and brand partners to employees to the independent contractors who work on the Shipt platform.

Eight months later, Witherspoon is convinced that the key to success is to keep the company focused on delivering on that differentiator instead of getting preoccupied chasing any other technology company in the grocery space.

At the Forum, Witherspoon spoke to the ways that his vision for Shipt is coming to life, with the first being a laser-like focus on quality service.

“Shipt works with high-quality shoppers and drivers, who take a tremendous amount of pride in meeting the needs of the customers in their community every single day,” Witherspoon explained.

Shipt was recently named one of America’s best companies for customer service in 2022 by Newsweek.

Another fundamental for Shipt is leveraging technology to make human connections. The company invests in product features that help the shoppers working on their platform connect with their customers, such as their Preferred Shoppers feature. Shipt’s app helps shoppers suggest substitutions to a customer when an item on their list is out of stock, and even proactively suggest new items to add to their cart in many cases.

Witherspoon also spoke passionately about Shipt’s goal to be the most diverse tech company by 2025.

“Everyone should work in an environment in which they feel like they belong and do their best possible work,” he said. “It’s something that has attracted really incredible talent to our organization, because of our values."

The company has made progress on that goal: 63% of Witherspoon’s leadership team is made up of women and 72% of senior leaders are racially diverse.

Witherspoon said it’s important to set the tone at the top, while putting actionable plans in place for the company and leveraging data to track progress.

Before becoming CEO at Shipt, Witherspoon was SVP of operations at Target in charge of leading planning and analysis, M&A integration, and process improvement initiatives across supply chain, stores and properties. He has  also worked as SVP operational performance and readiness at UnitedHealthcare and was chief restaurant excellence officer for the KFC US division of Yum! Brands leading the overall transformation of operations.

Shipt is an independently operated, wholly owned subsidiary of Minneapolis-based Target Corp., which is No. 6 on The PG 100, Progressive Grocer’s 2022 list of the top food and consumables retailers in North America, with nearly 2,000 locations. Founded and based in Birmingham, Ala., Shipt also maintains an office in San Francisco.