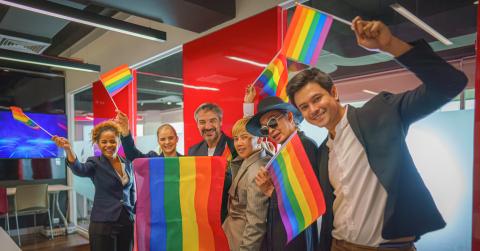 Numerous food, beverage, consumables and grocery companies have been named a Best Place to Work for LGBTQ Equality for satisfying all of the CEI’s criteria results and receiving a 100% score.

Despite the challenges of the past year, according to the Washington, D.C.-based foundation, “the food, beverage and grocery industry has continued to advance vital workplace protections for LGBTQ employees around the world, as acknowledged in this report.”

The sector is only part of the 1,142 major U.S. businesses that were also included in the 2021 CEI, the largest number of companies to be ranked to date. Numerous food, beverage, consumables and grocery companies have been named a Best Place to Work for LGBTQ Equalityfor satisfying all of the CEI’s criteria results and receiving a 100% score.

“From the previously unimaginable impact of the COVID-19 pandemic, to a long overdue reckoning with racial injustice, 2020 was an unprecedented year,” noted HRC President Alphonso David. “Yet many businesses across the nation stepped up and continued to prioritize and champion LGBTQ equality. This year has shown us that tools like the CEI are crucial in the work to increase equity and inclusion in the workplace, but also that companies must breathe life into these policies and practices in real and tangible ways. Thank you to the companies that understand protecting their LGBTQ employees and consumers from discrimination is not just the right thing to do — but the best business decision.”

Many of these, such as Ahold Delhaize USA, parent company of Food Lion, The Giant Co., Giant Food, Hannaford, Peapod, Retail Business Services, and Stop & Shop, as well as Walmart and Kroger, have scored 100% on previous indexes.

“Our team members are at the front and center of everything that we do, which is why we support each team member fully and uniquely,” said Matt Lutcavage, VP of human resources at Carlisle, Pennsylvania-based Giant Co. “Guided by our ‘Be You’ team promise, we are committed to creating a growing culture of inclusion and belonging across our organization. We are grateful for this distinction and for our team who has made The Giant Co. a place where everyone — team members, supplier and community partners and customers alike — is respected, valued, heard and welcomed just the way they are.”

According to the HRC, the greatest progress measured over the CEI’s 19-year history of the CEI, and continuing into this year, has been businesses’ wide-scale adoption of transgender-inclusive initiatives, including gender identity protections in their nondiscrimination policies and transgender-inclusive health insurance coverage.