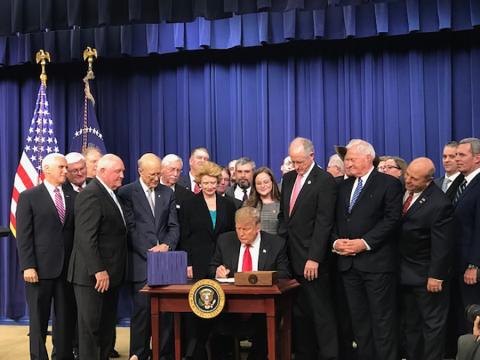 The Agriculture Improvement Act of 2018 – more commonly called the Farm Bill – was signed into law by President Donald J. Trump at a Dec. 20 ceremony at the Eisenhower Executive Office Building, a move that drew cheers from industry associations and generated excitement among one group in particular: hemp farmers and product manufacturers.

“President Trump signed a Farm Bill into law that strengthens the SNAP public-private partnership between the federal government and independent supermarket operators and provides certainty for the various stakeholders within the food supply chain,” said Peter Larkin, president and CEO of the Arlington, Va.-based National Grocers Association (NGA). “Independent grocers are the backbone of their community and are essential in the SNAP food delivery system.”

As it did following the bill’s passage on Dec. 12, NGA went on to note the following wins the legislation gives retailers:

Grocers weren’t the only stakeholders to hail the bill’s passage into law.

“The 2018 Farm Bill is a major victory for fresh produce,” asserted Robert Guenther, SVP of public policy at the Washington, D.C.-based United Fresh Produce Association, who was present at the signing ceremony. “Despite differences between the House and Senate, Congress has once again shown that when legislation is dealt with in a bipartisan manner, the American people will benefit.”

Additionally, as the law “both legalizes hemp as an agricultural commodity and removes it from the controlled-substances list, [and] gives states the opportunity to be the primary overseers of hemp production,” in the words of Sen. Mitch McConnell (R-Ky.), sponsor of the provision, growers of the crop and manufacturers of products made from it were enthusiastic about the possibilities, including for foods and supplements, as well as for other retail products.

“With the signing of the Farm Bill, a very long battle was won,” said Morris Beegle, co-founder of the Loveland-based Colorado Hemp Co., which offers apparel, posters, and books and media. “Hemp and all parts, including cannabinoids, extracts and derivatives of the plant, have been removed from the Controlled Substances Act. …After the Farm Bill passing both houses of Congress and being signed … by President Trump, hemp is now explicitly legal and hemp prohibition is over.”

The executive branch of government was on board with the provision as well. “This is an industrial-use product, medicinally as well as other products, and we look forward to developing markets for it if it’s a profitable crop,” Agriculture Secretary Sonny Perdue told Fox Business News. “Agriculture needs new products.”