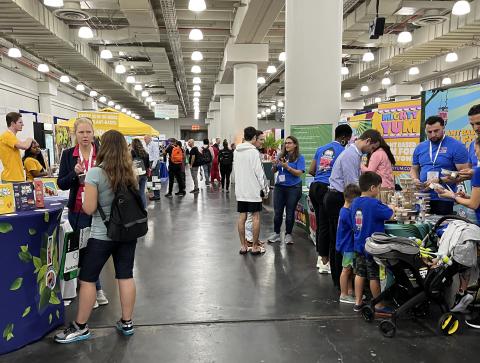 Deli meat offerings proved to be a particular standout at the 2022 Plant Based World Expo North America, held at the Javits Center in New York City.

It was great to be back at the Jacob K. Javits Center in New York for this year’s Plant Based World Expo North America, but this time, it would even be more special for me: While last year, I had taken part in a panel at the event, this time, I would be moderating a panel on the apt topic of “Finding a Healthy Balance in Retail.”

Before my panel took place at 2 p.m. on Sept. 9, the second and last day of the expo, I was able to take a look at and sample the wide assortment of plant-based foods on display. Although ground patties and strips meant to mimic the flavor of beef were still in evidence – Innohas brand Meat Free-Dom’s Korean-style galbi (a dish traditionally made with beef ribs) was basically indistinguishable from the real deal – there were more items approximating such other meat products as chicken (mostly nuggets, but also fries, strips and patties); hot dogs; breakfast sausages; pork ribs and seafood, with many offering improved texture and taste from items featured at earlier shows. The Cutting Vedge showed originality by crafting tasty meatballs from artichokes; while not tasting exactly like any existing animal protein, they still managed to be undeniably meaty.

A particular standout was the deli meat selection, including authentic-tasting cold cuts from Mighty Yum, which makes a meat-free Lunchables-inspired line; bologna slices from Plantcraft and Better Meat; and Mrs. Goldfarb’s Unreal Deli, which exhibited its recently released Steak Slices, along with its Corn’d Beef and Roasted Turk’y varieties. I also got to speak to the missus herself – CEO Jenny Goldfarb – who, along with her dad and CFO, Steve Gross, told an inspiring story about how they overcame COVID, which landed Gross in the hospital on a ventilator, a severe setback from which he has made a miraculous recovery, to expand their business at foodservice and in retail.

At a presentation on FMI – The Food Industry Association’s recently released “Power of Plant-Based Foods and Beverages” report, held in the Learning Garden right on the expo floor, FMI’s Steve Markenson and Sherry Frey of NielsenIQ, which sponsored the report and provided sales data and analysis for it, delivered highlights from the research. The organizations found that although consumers often identified plant-based foods as being healthy, there was still a lack of knowledge, and even outright confusion, when it came to these emerging items. Other key takeaways were that taste is a key driver of trying out and continuing to eat plant-based foods, animal welfare is an important consideration across the store, and flexitarianism is a crucial element of alternative-protein consumption.

My own panel looked at how retailers could best leverage consumers’ perception of the healthfulness of plant-based products to drive trial and sales of such foods. Panelists. Panelists Molly Hembree, a registered dietitian at The Kroger Co. (and All’s Wellness columnist for Progressive Grocer); Scott Stoll, M.D., co-founder of The Plantrician Project; and Julie Mann, chief innovation officer at PURIS Holdings LLC, notably stressed the importance of education for consumers and store associates alike in raising awareness of plant-based foods and their role in a healthy diet. It was a pleasure to meet these distinguished panelists and hear their insights on this timely topic, as well as to witness firsthand the ongoing development of an ever-more-important sector of the grocery industry.