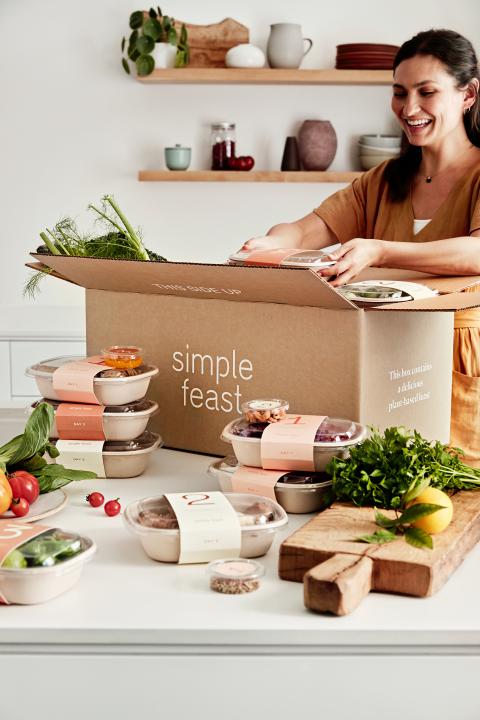 Plant-based meal kits are how Simple Feast is introducing itself to the United States, but solutions to solve waste and health issues are also in the pipeline.

Simple Feast, a Danish B Corporation with $45 million in funding that offers plant-based meal kits, pantry staples and closed-loop delivery waste among its vertically integrated sustainable food and agriculture solutions, has now arrived in the United States, hoping to replicate its sustainable business model.

Taking a hyper-local approach to agriculture and championing regenerative farming, Copenhagen-based Simple Feast begins its U.S. rollout in Southern California on April 13 with various local USDA organic farmers before heading east and rolling out products like everyday plant-based pantry options. The company’s goal is to shift the food industry mindset into one focused on finding solutions.

Meal kits are how Simple Feast is introducing itself to this country, but solutions to solve waste and health issues are also in the pipeline. Featuring meals curated by celebrated chefs from acclaimed restaurants like Noma and The French Laundry, the company aims to appeal to diners beyond vegetarians and vegans. The chef-driven menus, crafted by Chief Innovation Officer Anders Vald and Director of Culinary Development Rasmus Kliim, provide such options as Crispy Potato Tacos with Lime-Cilantro Slaw, Kale-Walnut Pesto Pizza, and Layered Tikka Masala, Curried Lentils and Rice.

Simple Feast estimates that for every plant-based meal served, it saves 2,235 pounds of carbon dioxide and 60.5 gallons of water, compared with an average meat diet — the equivalent of driving around the earth 45 times and 660,000 showers.

Inventor of the world’s first bio-based reusable box, bringing it closer to zero waste, the company has launched 32 new plant-based prepared food products in 2020, and early this year entered its first online retailer, Denmark-based Nemlig, where its products sold out within the first three days. In only three years, the company has grown to serving 220,000 meals per month.

Additionally, in the past year, Simple Feast has grown its team from 90 to 162 dedicated employees across Denmark, Sweden, Berlin and California.

Simple Feast was founded with a corporate altruism mission to solve issues through sustainable food practices and consumption, including the donation of meals not purchased to needy local residents. The brand’s international investors include Balderton, Sweet Capital, 14W, Kinnevik and byFounders.

In further company news, Simple Feast has opened up shareholding opportunities to the public, democratizing its structure and allowing everyone to own one of Europe's fastest-growing sustainability companies. The raise begins with pre-registered investors April 14, and will be open to anyone on Crowdcube 24 to 48 hours after.

“We have decided to offer shares of our business to show our loyalty to existing as well as future customers, because they are the ones creating real change in the world every time they eat plants instead of meat,” said Simple Feast CEO Jakob Joenck. “This is the reason that we are now making it possible for them to join us on our journey and own a part of Simple Feast.”

Other plant-based meal kit providers include Boston-based Purple Carrot and San Francisco-based Thistle, while companies such as Berlin-based HelloFresh have drawn attention to their various sustainability efforts. HelloFresh is is No. 88 on The PG 100, Progressive Grocer's 2020 list of the top food and consumables retailers in North America.