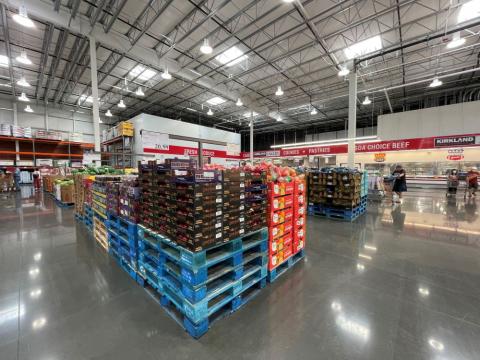 Costco Wholesale Corp. elevated a 30-year veteran of the company to direct merchandising operations on the same day that the retailer reported another quarter of earnings and sales growth.

In a second quarter earnings call on March 3, Costco CFO Richard Galanti announced that Claudine Adamo, previously SVP, merchandising/non-foods and e-commerce, will become EVP, COO, merchandising, a role that was recently vacated by Ron Vachris when he was promoted to president and COO in February.

"Just this week, internally, we reported that taking Ron's previous spot as head of merchandising is Claudine Adamo," Galanti said. "Claudine has been with us for 30 years. She began in an hourly position in our Kirkland warehouse in 1992, 30 years ago but a year later came into buying and has been in buying ever since and most recently was senior VP of nonfoods sales — of nonfoods merchandising. And again, she'll be taking over — looking overall at merchandising."

For the second quarter ended Feb. 13, net sales at Costco increased 16.1% to $50.94 billion, from $43.89 billion last year. Same-store sales increased 11.3% excluding fuel and currency impacts. Digital sales increased 12.5%. Traffic or shopping frequency was up 8.3% year over year in the quarter in the United States. Costco's average transaction or ticket was up 4.6% in the U.S.

Galanti said estimated overall price inflation was in the 6% range during the quarter.

"I want to give another shout-out to the job that our merchants and our traffic department and operators have all been able to do to keep — in order to keep the products that we need, pivot when and where necessary, keep our warehouses full, like keeping prices as low as we can for our members and continue to show great value versus our competitors," he said.

Galanti said the inflationary/supply chain pressures that Costco is seeing include higher labor costs, higher freight costs, as well as higher transportation demand, along with container shortages and port delays.

"We are also seeing increased demand in certain product categories, various shortages of everything from computer chips to oils and chemicals to resins, higher commodity prices from foodservice oils to additives and motor oils, to plastics, to detergents, to paper products as well, on the fresh side proteins and butter and eggs and things like that, not very different than what you hear and read and see from others. But again, we think we've done a pretty good job of corralling it as best we can," he said.

In the first quarter, Costco said it had chartered three small container vessels to provide additional flexibility on shipping.

"We have now chartered a total of seven ocean vessels, up from those three, for the next three years. And these would transport containers between Asia and the U.S. and Canada. We've also leased containers for use in these ships. With these additions, about a quarter of our annual transpacific containers and shipment needs are being accommodated this way, which gives us additional supply chain flexibility," Galanti said.

Issaquah, Wash.-based Costco operates 809 warehouses worldwide. The company, which is No. 4 on Progressive Grocer’s 2021 PG 100 list of the top food and consumables retailers in North America, also has e-commerce sites in the United States, Canada, the United Kingdom, Mexico, Korea and Taiwan.