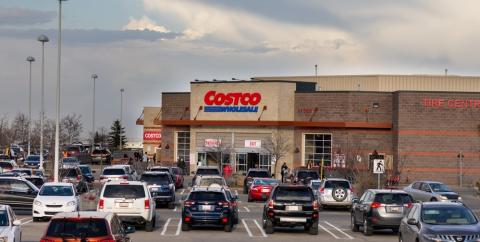 Costco is still mulling over the idea of raising membership fees this year.

In terms of comparable sales for the third quarter, the United States was up 16.6% and Canada up 15.2%, while the total company was up 14.9%. The company's e-commerce business was better by 7.4% versus a year ago.

For Q3 comp metrics, traffic/shopping frequency increased 5.6% in the United States. The best-performing categories were candy, sundries, tires, toys, jewelry, kiosks, home furnishings, apparel, bakery and deli. Underperforming departments were liquor, office, sporting goods and hardware, all of which were quite strong a year ago.

Additionally, Bob Nelson, SVP, finance and investor relations at Costco, noted that fresh experienced some difficulties compared with last year. “In terms of the core margins on their own sales in Q3, our core-on-core margins were lower by 39 basis points, approximately two-thirds of this coming from fresh foods,” he said. “Also contributing to the fresh decline this quarter were higher raw-material costs and higher labor costs due to our new wages.”

In terms of renewal rates, the warehouse club giant hit an all-time high. “At Q3 end, our U.S. and Canada renewal rate was 92.3%, up 0.3% from the 12 weeks earlier at Q2 end,” said Nelson, “The worldwide rate came in at 90% for the first time in company history, and that's up 0.4% from what we reported at Q2 end. Renewal rates continue to benefit from the increased penetration of both auto renewals and more executive members, and, in addition to that, higher first-year member renewal rates than what we have historically seen.”

Costco is also seeing more strength in terms of the number of members that sign up digitally, which has become a bigger percentage of its growth as well. “I think some of that has to do with some of our online offerings that hit, particularly in say, grocery,” observed Nelson. Costco’s e-comm business for grocery continues to grow, up low double digits in the third quarter.

Meanwhile, the wholesaler historically has raised membership fees every five to six years, with the last three increases coming on average at about the 5.5-year time frame. The company’s last increase was in June 2017. As Costco approaches this 5.5-year mark, the executive team is in discussions about a possible increase, but has yet to report any specifics.

While pressures from higher commodity prices, higher transportation costs and supply chain disruptions are still a factor, Costco did see inflation in fresh foods come in slightly lower in the third quarter versus the second quarter a year ago as it began cycling high meat prices. “We believe our solid sales increases and relatively consistent margins show that we have continued to strike the right balance in passing on higher costs,” noted Nelson.

Regarding inventory, the retailer's total inventory in the third quarter was up 26% year over year, versus up 19% in the second quarter. “We continue to expand and open new locations, 20 new in the last 12 months,” said Nelson. “We are lapping some low stocks in certain departments as a result of last year's high demand, and we are purposely building inventory in our e-comm business, primarily in big and bulky categories.”

For fiscal 2022, Costco expects to open 14 new warehouses in the United States and two in Canada – plus its first opening in New Zealand, which will occur in August of this year.

In addition, Costco made an important move in its leadership team in the quarter, promoting Ron Vachris to president and COO. The role was previously held by CEO Craig Jelinek, who will remain as CEO and a board member.

Issaquah, Wash.-based Costco is No. 3 on Progressive Grocer’s 2022 PG 100 list of the top food and consumables retailers in North America.