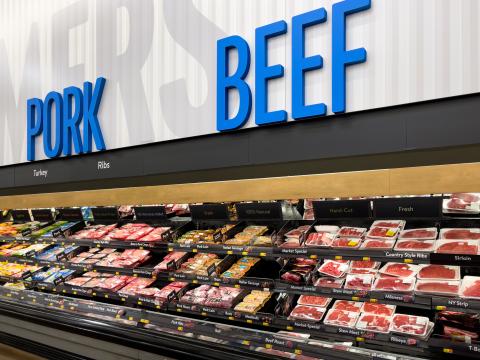 Prices of premium beef cuts are coming down, as demand softens among budget-minded shoppers.

New reports point to a slowdown in some commodity prices after surges throughout much of 2021 and 2022. According to an Associated Press story, the cost of grains such as wheat and corn fell over the summer.

Wheat prices are now 40% lower than their high, while corn prices have dipped 25% since this past spring. The declines can be attributed to an evening out of supply and demand at a time of slowing macroeconomic conditions and a tentative grain export agreement between warring Russia and Ukraine.

“It should help, it’s just a question of how long that is sustainable,” Tom Martin, senior portfolio manager with Globalt Investments told the AP. “As we slow down, and the economy seems generally to be slower, you get less inflationary pressures.”

Also this week, The Wall Street Journal reported that beef prices are down from some of their peaks. Citing data from Chicago-based market research firm IRI, the newspaper noted that retail beef prices dropped 0.7% during a four-week period ending Aug. 7. Indicating that this is more of a trend than an anomaly, it was the second consecutive monthly decrease following 18 months of steady or increased prices.

Some of the price declines seem to be demand driven, as consumers shifted away from premium cuts to more budget-friendly products. For example, the latest data from the U.S. Department of Labor shows that the cost of fresh steak was down 1% from June and 1.5% on a year-over-year basis, while the price of more economical ground beef went up 9.7% compared to this time last year.

To Martin’s point – and reflecting recent demand curves – the greater economy remains wobbly. An Aug. 25 report by U.S. Commerce Department revealed that the U.S. gross domestic product shrank by 0.6% on an annualized basis during the second quarter of the year. While that rate was slower than expected due to steady consumer spending, it still meets the definition of recessionary times.