The popularity of charcuterie has turned the spotlight on cheese flights, such as Schuman Cheese's product line.

Is the dairy perimeter, including the cheese case, ripe for change?

Following a year that upended shoppers’ lifestyles, the retail dairy department has been buoyed by strong sales and faces an opportunity for further growth through evolution and innovation.

“It took a lockdown for us as a country to remember we had a love affair with dairy,” says Al Dejewski, VP of marketing at Washington, D.C.-based MilkPEP, which represents U.S. milk processors. “Dairy was up at retail for the first time in 10 years, and we are incredibly excited by that, especially knowing that there are alternative channels emerging.”

There were many plus signs throughout the dairy sector in the past year. The department added $7 billion in 2020, rising from $54 billion to $61 billion, according to information from the Madison, Wis.-based International Dairy Deli Bakery Association (IDDBA).  The most recent “What’s in Store 2021” report from IDDBA reveals that sales of refrigerated dairy milk rose 8.2%, while natural dairy cheese grew 18.7%, dairy processed cheese climbed 15.9%, and dairy refrigerated creams and creamers were up 14.2% in the past year.

Within the cheese category, dairy natural slices led increases, at 13.9%, followed by natural shreds, at 13.4%, and natural chunks, at 5.3%. Deli specialty cheeses rose 13.7% in volume sales, while deli grab-and-go cheeses increased by 21.2%, according to research published in “What’s in Store 2021.”

Recent data from the USDA Economic Research Service (ERS) points to cheese as a driver of overall growth in per capita dairy consumption. In the past decade, per capita consumption of cheese has risen 19%, according to Washington, D.C.-based ERS.

Moving ahead, although the pace of volume and sales increases in the fresh dairy perimeter may not stay the same as during the height of the pandemic, many shifts may be longer-term in nature. “Last year was a bit of an anomaly, but even as there is a desire to go back to restaurants, people have discovered a love of cooking at home, and dairy and cheese are a part of that,” observes Eric Richard, industry relations coordinator for IDDBA.

For a food as ancient as cheese, there are still many new takes on the form, including flavored varieties like Saputo Cheese USA's Jalapeño Honey Montchevre, seen here incorporated into a recipe.

To Richard’s point, in addition to ready-to-drink and ready-to-eat products, dairy-based ingredients have propelled the recent surge in dairy.

“From a fluid-milk perspective, we saw the resilience and cultural relevance of milk as it relates to the consumer as creator,” says Dejewski. “Milk is a fundamental ingredient in many recipes, whether it’s for cakes or whipped coffee.”

The latter item is just one example of a recipe that’s gone viral. Another is a recipe for baked feta cheese pasta that went gangbusters on TikTok and spread to other social media platforms earlier this year.

To help consumers learn how to cook with dairy products, manufacturers and retailers can work together to provide inspiration, tips and recipes. Heinen’s Fine Foods, based in Cleveland, Ohio, regularly posts recipes on its website, including recent ones for a chicken parmesan sandwich and cheesy beef rolls. In the Midwest, the Mariano’s chain, a banner of Cincinnati-based Kroger, is another example, recently sharing customer-favorite recipes for One Pot Tuscan Macaroni & Cheese and Savory Cheddar Bread Casserole, among others.

While providing recipes and serving tips to shoppers isn’t new, grocers can use digital platforms and other technologies to make sure that ideas get to consumers just as they’re making decisions on what to buy and serve.

Products featuring both plant- and dairy-based foods, among them The Laughing Cow Blends cheese spread line, are extending the dairy category

The popularity of charcuterie might have reached an apex during this past holiday season, when charcuterie gingerbread houses took social media by storm.

Even before the pandemic, charcuterie was trending. For the past few years, CPGs and retailers have shared ideas and created displays dedicated to building charcuterie boards, with cheese often playing a starring role alongside cured meats.

Similarly, cheese trays and boards have taken off. ”I think what has most benefited the artisan cheese category over the past year is the booming interest in composed cheese boards,” notes Janet Fletcher, publisher of the Planet Cheese blog and the author of several books on cheese. “Instagram has egged people on and made creating cheese boards almost a competitive sport.”

Ready-to-build and -serve charcuterie and cheese boards are enlivening the cheese category, appealing both to consumers who are still sticking close to home and those who are starting to entertain again. For instance, Columbus Craft Meats, a brand of Austin, Minn.-based Hormel Foods, now offers a prepackaged tasting board featuring Italian dry salami, Calabrese salami, white cheddar cheese slices, olives, dark chocolate-covered cranberries and multigrain crackers.

On par with charcuterie and cheese flights, Hormel is focusing on the experiential enjoyment of cheese with a new Natural Choice Wine Pairing line. The single-use trays feature uncured salami, mozzarella cheese and dark chocolate-covered almonds that pair with white wine, and uncured sopressata, havarti cheese and dark chocolate-covered cherries designed to go with red wine.

One of the most fun things about the cheese category within dairy is the plethora of products, spanning varieties of fresh cheeses (soft, semi-soft, hard and blue-veined, among others) as well as processed cheeses in a range of formats and flavors. For a food as mature as cheese, there are still many new takes on the form, from flavored varieties like Lincolnshire, Ill.-based Saputo Cheese USA’s new Jalapeño Honey Montchevre to a recently introduced line of lactose-free soft-ripened Briette cheeses from Englewood Cliffs, N.J.-based Champignon North America Inc.

That said, while the expansive world of cheese is fun for foodies and those in the cheesemaking and retail industries, it can be overwhelming for some shoppers, especially those who are new to cooking.

When it comes to artisanal cheese, the retailer serves an important role. “Grocers have to invest in their staff to do a good job selling specialty and artisan cheese,” advises Fletcher, who is currently working on a training session for cheese counter staff at one Midwest grocery chain.  “They need compelling signage and staff who are trained and informed. It pays off because knowledgeable and confident employees will sell more cheese.”

One drawback of the global health crisis is the elimination of sampling programs that would otherwise entice people to try different products. “It’s tough, because you can’t sample in an environment in which you are wearing a mask,” admits Richard.

In lieu of sampling, he suggests, a retailer might set up tables in an outside setting. Another idea is to create smaller sample packs that can be shared in store or via e-commerce. “There are some manufacturers working with retailers who are including individually wrapped pre-packaged samples with online orders,” says Richard. “It’s a great way to expose consumers to new varieties.”

Although cheese is already rich in nutrients, some new cheese products are made with ingredients that further enhance health and wellness, like Babybel Plus+ functional dairy snacks.

As grocers rethink their fresh perimeters in the wake of fundamental changes in the way people shop and eat, they can also consider different ways to merchandise dairy products.

“We need to change the conventional thinking,” agrees Dejewski, who points out that many dairy products are still commodity-based and private label. “There are brands that offer a unique point of view, and retailers can also think of other ways [to reach consumers], like creating secondary displays.” For milk, a secondary display may have flavored milks, organic milks or grab-and-go milk products.

The specialty cheese case is an example of a secondary display that can become an attraction within the store. A specialty or artisanal cheese section can be curated in an e-commerce platform, too.

A grocer could also dedicate a small case to locally produced dairy products. Shoppers who like supporting local farmers and producers would appreciate the story behind some of these products, told through point-of-sale signage or online profiles.

The ongoing popularity of keto and Paleo diets also allows dairy products to shine. Grocers can provide suggestions to shoppers following such eating plans and expand their keto-friendly offerings with innovative products like a line of cheese wraps from Minnetonka, Minn.-based Crystal Farms Dairy Co. that can be used in place of sliced breads or tortillas.

Ultimately, and as always, messages and merchandising need to be impactful. “It comes down to highlighting the attributes of a product – calling out local, calling out protein, calling out flavor,” notes Richard. “Especially with people shopping online, in-store signage is still important.”

Widening the appeal of the traditional dairy department may mean redefining it somewhat. As dairy alternatives like plant-based milks, creamers, cultured products and cheeses continue to gain inroads among consumers, the dairy department can benefit from signage that directs shoppers both to dairy foods and beverages and their non-dairy counterparts.

That market is only expected to expand, with sales of dairy alternatives projected to reach $41 billion by 2025, according to a report from San Francisco-based Grand View Research. Already, several traditional dairy brands have developed plant-based alternatives to enhance their portfolios and reach consumers who are, if not exactly going vegan, embracing more flexitarian eating habits. Blends of plant- and dairy-based foods are also extending the category, with items like new Laughing Cow Blends cheese spreads from Bel Brands USA. 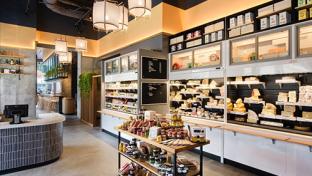 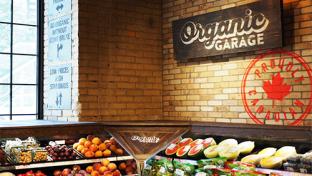