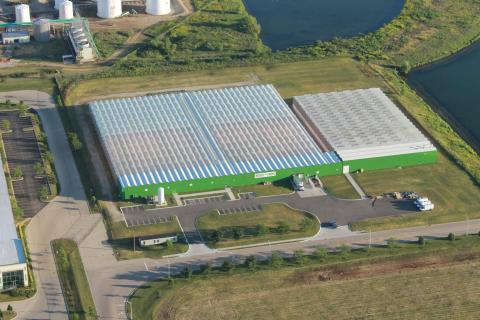 BrightFarms, a supplier of locally grown salads for supermarkets, has opened an expansion to its Rochelle, Illinois, greenhouse. The subsequent increase in production will support the company’s continued growth in the market, including a 34% rise in year-over-year sales at Mariano’s.

The 160,000-square-foot facility originally opened in 2016. BrightFarms currently supplies more than 150 Roundy’s supermarkets under the Mariano’s, Pick ‘n Save and Metro Market banners with packaged salads that arrive on store shelves in as short a time as 24 hours after harvest. BrightFarms' in-store presence in the region includes a breakthrough display and references to the Rochelle greenhouse.

“For over four years now, BrightFarms has provided consumers in Illinois and Wisconsin with delicious local produce that was grown within a short drive of their local Mariano’s and Pick ‘n Save,” said Abby Prior, SVP sales and marketing at Irvington, New York-based BrightFarms. “With our increased production, we’re thrilled that we have the opportunity expand our partnership with Roundy’s and provide more consumers in the region with access to the freshest, cleanest and most responsibly grown produce.”

Earlier this month, BrightFarms marked Mariano’s 10th anniversary with a series of in-store activations across the Chicago market.

Milwaukee-based Roundy's is a wholly owned subsidiary of The Kroger Co. Cincinnati-based Kroger employs nearly half a million associates who serve 9 million-plus customers daily through a seamless digital shopping experience and 2,800 retail food stores under a variety of banner names. The company is No. 3 on The PG 100, Progressive Grocer’s 2020 list of the top food and consumables retailers in North America.