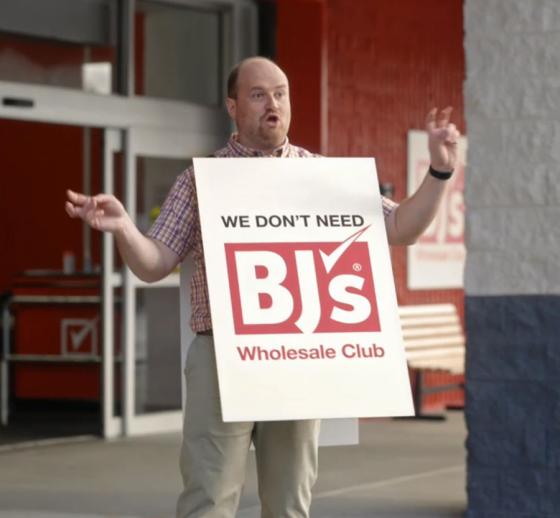 BJ's humorous new ad campaign in the metro Detroit area features Frank, a character who wants to persuade others not to shop at the wholesale club chain

To mark its entry into the metro Detroit area later this year, warehouse club operator BJ’s Wholesale Club, whose stores are primarily on the East Coast, has launched a cross-channel campaign to raise awareness of its brand in a new market.

The humorous campaign, which is rolling out across TV, radio, out of home, digital and social media, features Frank, a member of the local community who’s not interested in what BJ’s has to offer, even if that includes savings of up to 25 percent off grocery store prices and other advantages. The ads show Frank in various settings, protesting against BJ’s and giving his reasons not to join the warehouse club, while unbeknownst to him, his wife, Brenda, a smart shopper, has already signed up.

“Consumers have more shopping options than ever, and we know some may not be looking for another wholesale club,” said Lee Delaney, BJ’s EVP and chief commercial officer. “But we know that once shoppers realize that BJ’s Wholesale Club can save them up to 25 percent off grocery store prices every day, they’ll be eager to join. Our new campaign builds on that promise, showcasing our fresh take on the wholesale club and all of the reasons to join BJ’s.”

“BJ’s Wholesale Club is bringing consumers a fresh take on the wholesale club experience,” added Terri Meyer, co-founder and co-CEO of New York-based independent advertising agency Terri & Sandy, developer of the research-grounded campaign, with media planning handled by Noble People, which has offices in New York and Santa Monica, Calif. “So we wanted work that would be just as unexpected as what BJ’s Wholesale Club has to offer. The result is an entertaining anti-spokesperson, whose protests will make consumers question why they haven't joined yet.”

The TV and video assets have launched in advance of the first two BJ’s Wholesale Club locations in the market, which are slated to open in Taylor and Madison Heights this fall.