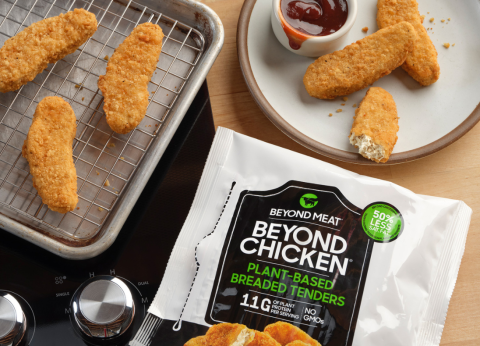 Consumers can now purchase Beyond Chicken Tenders at Albertsons, CVS, Sprouts and Whole Foods Market, and they'll be rolling out to all Kroger banners throughout April.

Beyond Meat Inc., a non-GMO plant-based meat company, is making its Beyond Chicken Tenders available for purchase at retail outlets throughout the country, including supermarkets, pharmacies and club stores.

Beyond Chicken Tenders were first introduced in retail outlets like Walmart, Giant Food and ShopRite, among others, in 2021. Now the product will be available in more than 8,000 new outlets nationwide, including Albertsons, CVS, Sprouts and Whole Foods Market, while expanding into all Kroger banners throughout April.

“Building on the positive momentum of our recent chicken launches, we’re excited to significantly expand the availability of our Beyond Chicken Tenders by showing up in more places for our consumers – from their favorite supermarket or drug store to large warehouse clubs – making delicious, nutritious and sustainable plant-based meat more accessible than ever before,” said Deanna Jurgens, chief growth officer at El Segundo, Calif.-based Beyond Meat.

As the plant-based market continues to grow, 62% of American households are now buying plant-based products, according to the Plant Based Foods Association’s 2021 U.S. retail sales data for the plant-based food industry. Additionally, the data found that chicken tenders were among the fastest-growing plant-based meat products in 2021, along with meatballs, chicken nuggets and cutlets.

Beyond Meat won the 2021 Food and Beverage (FABI) Award from the National Restaurant Association Show in recognition of the taste and versatility of Beyond Chicken Tenders, ahead of the product’s national foodservice launch that year.

The company has rolled out a series of successful poultry innovations via limited-time offers at popular restaurant chains across North America, such as Beyond The Original Orange Chicken at Panda Express across 10 markets, Beyond Meat Nuggets at all A&W Canada stores nationwide in 2021, and Beyond Fried Chicken at KFC locations throughout the United States in 2022.