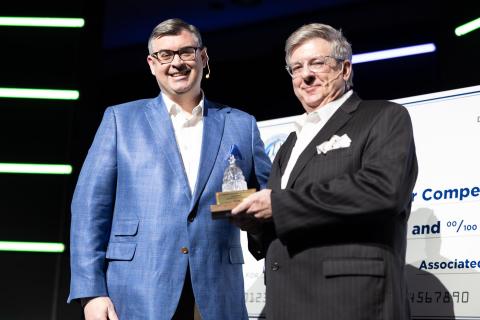 “Over the years, David has always been one of the first to host an elected official at an AWG facility, and he’s always willing to come to Washington to meet with policymakers on issues impacting independent community grocers,” said Greg Ferrara, NGA president and CEO. “For many years, he has been a leader in helping to advance critical public policy issues that impact independent supermarkets.”

Before becoming the president and CEO of AWG in 2015, Smith started his career in the food industry as an independent store owner. He quickly rose through the ranks at wholesaler Fleming Cos. Inc. before joining AWG in 2003, and as the company’s SVP and general manager, he opened the company’s Gulf Coast division in Louisiana in 2013.

Throughout the years, Smith would regularly appear before lawmakers in Washington, D.C., to testify about issues that affect independent grocers. In July 2021, Smith testified before the Senate Judiciary Committee, explaining to senators how power buyers use their dominance to take greater control of the market, demanding special treatment from suppliers without economic justification, and described the toll on suppliers, agriculture producers and consumers.

He recently argued in support for the enforcement of the Robinson-Patman Act, a federal law passed in 1936 to outlaw price discrimination. An amendment to the 1914 Clayton Antitrust Act, the legislation is supposed to prevent "unfair" competition.

“Explaining antitrust issues isn’t something that easily rolls off the tongue for most, which is why it was so important to have people like David participate in countless meetings with elected officials, federal regulators and administration officials, helping them understand how inequities in the marketplace, driven by the explosive growth of power buyers, directly impacts communities across America,” Ferrara said.

AWG’s Excellence Awards ceremony, in conjunction with its Innovation Showcase and Annual Meeting, was held at the Overland Park Convention Center, in Overland Park, Kan.

Washington, D.C.-based NGA is the national trade association representing the retail and wholesale community grocers that comprise the independent sector of the food distribution industry. The independent grocery sector is accountable for about 1.2% of the nation’s overall economy and responsible for generating more than $250 billion in sales, 1.1 million jobs, $39 billion in wages and $36 billion in taxes. NGA members include retail and wholesale grocers across the country, as well as state grocers’ associations, manufacturers and service suppliers.