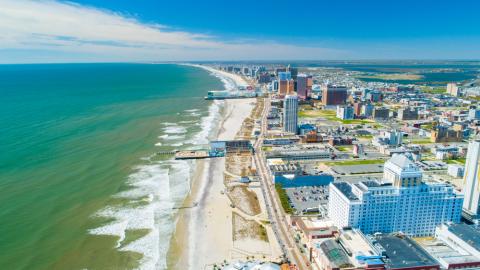 While there are several food stores in Atlantic City, N.J., it hasn’t had a full-service grocery store in years.

ShopRite won’t be coming to Atlantic City, N.J., after all, according to a published report, which noted that city officials still hope to open a full-service supermarket in the area.

After more than a year of talks with Springfield, N.J.-based Village Super Market, which operates 34 stores under the ShopRite, Fairway and Gourmet Garage banners, the Casino Reinvestment Development Authority (CRDA) told the company this week that it was suspending negotiations, The Press of Atlantic City reported. When contacted by the newspaper, Village Super Market declined to comment on the matter. Apparently, there had been little progress at the construction site since a groundbreaking ceremony in late 2021.

“The termination of this arrangement with Village Super Market was a difficult but responsible decision informed by careful consideration of economic obstacles and our acute understanding of the urgency of food insecurity in Atlantic City,” New Jersey Gov. Phil Murphy said in a statement. “In light of this, we were forced to pivot and honestly reassess the best path forward to deliver affordable and nutritious food for the city’s residents.”

Mayor Marty Small Sr. told The Press of Atlantic City that there were plans in motion to seek a new proposal for the project.

“We will continue to work diligently to bring a full-service supermarket to Atlantic City, because that’s what the people deserve,” Small told the publication. “I’m hopeful.”

While there are several food stores in the city, it hasn’t had a full-service grocery store in years, according to The Press of Atlantic City. State officials told the newspaper that the request for new proposals will be open to any grocery store operator, including Village Super Market.

In 2021, the CRDA approved spending $18.7 million on construction of the grocery store, which would be leased to Village Super Market for $1 a year. “Sources familiar with the negotiations” told The Press of Atlantic City that the company had requested a $500,000-a-year subsidy from the CRDA to cover potential losses.