(Editors' note: This is part three of a five-part series.)

Since 2015, at least 10 grocery chains have filed for bankruptcy. If you’re a grocery executive, bankrupt banner names such as Marsh Supermarkets, Lucky’s Markets, Fairway Market and Earth Fare might be the kind of thing racing through your mind in the middle of the night.

But when Progressive Grocer asked food retailers that exact question early this year as part of its annual survey of grocers, respondents said that they’re not losing that much sleep over the state of the industry.

[Editor’s note: Retailers were surveyed before the COVID-19 outbreak intensified in March.]

In fact, nearly half of grocery retailers in the United States are more bullish than last year about their prospects and the future of the food retail industry, with 46% of retailers surveyed saying they feel more optimistic than a year ago. That’s up slightly from last year, when 45% reported increased optimism. About 26% of retailers said this year that they’re less optimistic than last year, and 29% reported no change.

Even beyond just optimism, PG specifically asked grocers this year to list the biggest issues keeping them up at night. What was their No. 1 worry? It had nothing to do with defunct banners or bankruptcies. The biggest issue for grocers, by far, was once again labor, including recruitment, retention, diversity and training. It’s the third year in a row that talent issues have topped this list, after rising from second place in 2017 to first in 2018. About 73% of all respondents named talent as their No. 1 concern, evenly shared among larger and smaller operators.

The next most pressing issues cited by grocers were competition (63%), the cost of employee benefits (51%) and the price of keeping up with technology (41%). Meanwhile, more than 93% said that they expect wage costs to increase, and about 80% expect benefit costs to increase. Fuel costs will stay the same, said 44% of grocers, and competition will increase, according to 61% of those surveyed.

According to the data, about 49% of grocers said that they expect profits to stay the same in 2020. And about 51% of retailers said that they expect gross margin to stay the same this year as well. But that was all before a disease called COVID-19 escalated in the United States and caused a huge spike in sales at retailers with exposure to food and consumables categories.

Even without the boost that grocers received from COVID-19, consumers were feeling optimistic about the channel. According to Chicago-based IRI’s Q4 2019 Consumer Connect Survey, traditional supermarkets still rank among consumers as the top channel for groceries. The 2020 coronavirus outbreak could, however, have a lasting effect on the supermarket industry in terms of pushing consumers to shop for food online more frequently. 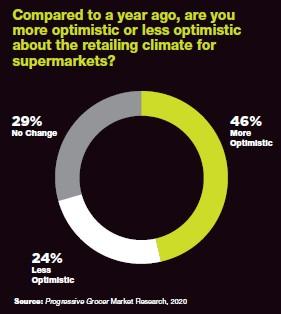 Last year, just 4% of grocery sales in the United States came online, according to Nielsen. However, the COVID-19 outbreak in the United States is having a huge impact on online grocery behavior, according to data from San Jose, Calif.-based Adobe Analytics, which monitors the ecommerce transactions of 80 of the top 100 U.S. retailers. A third of consumers said in March that they had purchased groceries for online pickup or delivery in the past seven days, according to a survey by analysts at Gordon Haskett Research Advisors, with offices in New York and Greenwich, Conn. Around 41% said that they were buying groceries online for the first time.

“We’ve all seen the memes and photos of what some store shelves look like as people prepare for the worst,” says Nate Smith, group manager of product marketing for Adobe Analytics. “Stores are running out of basic necessity items like toilet paper and hand sanitizer, and we think that is a significant driver of online shopping at the moment. Add to that the fact that many people are also trying to avoid large gatherings and public places, and it’s easy to see why online shopping for COVID-19-related items is up.”

The question is, how many grocery shoppers will move online permanently after the crisis? Whatever the answer to that question, one thing’s for certain: The acceleration of ecommerce adoption would present grocers with another tremendous growth opportunity. That’s one reason for them to be even more optimistic heading into 2021.