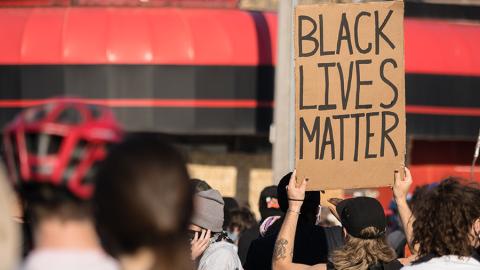 A recent protest in Minneapolis after George Floyd's death in police custody there.

In common with many other food retailers, Ahold Delhaize USA has revealed that the company and its local brands are committing $5 million “to work toward racial equality.”

The grocer noted, “In addition to the many other diversity and inclusion efforts underway within Ahold Delhaize USA companies, each of the local brands will work with associates and community partners to support education, advocacy and business development within the Black and African American community.”

Added Ahold Delhaize USA: “We hold ourselves accountable for lasting change where we work and live. We encourage others to do the same and share in our hope for a better future.”

Among the other food retailers that have donated funds and time to fight racism following the death of George Floyd last month in police custody are H-E-B, Hy-Vee, Kroger, Publix, Target and Walmart.

In related news, Hy-Vee stores in the Twin Cities region will hold a donation campaign and “Stuff-A-Truck” event to help provide staple items to local nonprofit organizations to help neighborhoods affected by unrest following the death of Floyd, a Minneapolis resident. Through Sunday, June 21, Hy-Vee customers can donate any dollar amount at the register during checkout. Proceeds from the donation campaign, as well as a supply commitment from Hy-Vee, will be used to buy grocery and other products that will go toward filling at least 11 semi-trucks.

With the participation of all 11 Hy-Vee stores in the Twin Cities, the Stuff-A-Truck event will take place Friday, June 19 through Sunday, June 21. During the event, customers can purchase bags to donate for $5 or $10 to add to the trucks. Each bag will be pre-filled with essential items.