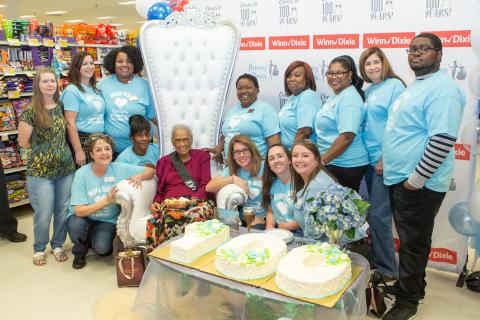 When Anthony Hucker, president and CEO of Southeastern Grocers (SEG), asked longtime employee Romay Davis her secret to living to 102, she gave an immediate and simple reply: “Love everyone – and do good.”

That mantra has carried Davis – known as “Ms. Romay” at SEG and in other circles – through a remarkable life. Before she joined Winn-Dixie as an associate at the age of 80, she enjoyed a 30-year trailblazing career in fashion and design. As a young woman during World War II, she served her country overseas as a member of the first all-Black women’s corps. She also broke through barriers at the time by graduating from New York University.

Davis has been honored for her philosophy-driven achievements in a variety of ways. SEG launched the Romay Davis Belonging, Inclusion and Diversity grant program in 2020 to honor her legacy and foster opportunities for the next generation of outstanding leaders. Then, this past summer, Davis – the oldest living member of the World War II battalion of Black female service members – received the Congressional Gold Medal, the the highest honor then Congress gives to civilians.

In a video interview marking her 101st birthday last year, Davis shared more of her advice on a job well done. “I’ve realized that if you are efficient and do what you had to do well, that people will get along with you,” she explained.

Her role at a Winn-Dixie store in Montgomery, Ala., over the past two decades has been truly customer-facing:  she works to ensure that products are placed just right on the shelf and in displays. As Davis noted: “Everything I do, I put myself in it. If there is a loaf of bread, I pick it up, smooth it out and put it on the shelf nicely so that the next person [who] comes in appreciates it. I can’t lift so much anymore, but I have always kept the shelves straight.”

Her store manager can attest to her merchandising skills. Bobby Godwin, store manager at location #448 in Montgomery, told Progressive Grocer during a recent interview, “She keeps the shelves straight, and she makes sure that the customers have the freshest product.”

Godwin, a 37-year Winn-Dixie team member who has worked with Davis for the past dozen years, also lauds her contagious work ethic. “The knowledge we’ve learned from her over the years is incredible – it’s a combination of business, life and everything else,” he asserted.

He noted that Davis has endeared herself to and inspired the store’s customers. “Someone each day will ask about her,” he said, adding that many shoppers remember her 100th birthday party, which drew a sizable crowd in 2019.

In addition to her work at Winn-Dixie, Davis remains a loyal store customer and regularly comes in to do her own shopping. Godwin pointed out that in her work and life, she is a role model to him, too. “I don’t complain about anything when I see what she does,” he said with a laugh.

Hucker is likewise effusive about Davis as an inspiration. “At 102 years old, Ms. Romay is still having fun, enjoying all that life has to offer and still loves to work. She is a kindhearted individual with a flair for life – to know Ms. Romay is an honor in itself,” he observed in an exclusive statement to Progressive Grocer.

To be sure, the Romay Davis story continues, as the centenarian doles out more sage advice that spans generations, backgrounds and jobs. “Be sure you want to do what you attempt to do, and then stick with it, knowing there will be hard times and good times,” she counseled. “You have to study, you have to believe in yourself. Be on time. If I get done early, I will find something else to do. Keep going.” 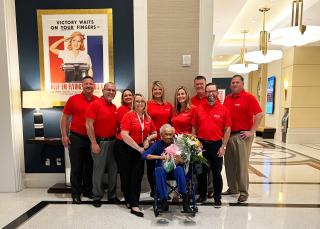