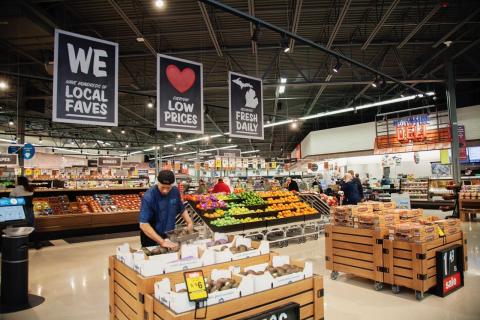 Meijer team members are invested in the retailer's donation efforts, banding together to identify receiving nonprofits.

Frederik Meijer, who founded the first Meijer grocery store with his father, used to compare the business to a three-legged stool that the family used in their dairy barn: one leg is the customer, one leg is the supplier and one leg is the team members. Take away one, he said, and the stool would fall over.

Fred Meijer’s philosophy continues today across many aspects of the business, including its charitable contributions. In addition to encouraging its customers to donate to good causes, such as efforts to combat hunger in communities, Meijer engages its team members to give back.

Case in point: Meijer announced this week that its second annual Meijer Team Gives program will donate $3 million to more than 500 nonprofit groups selected by the company’s employees. The concept behind the Meijer Team Gives program is to empower team members to support organizations that are meaningful to them. Each store and distribution facility is given $10,000 to share with one nonprofit or split between two in their respective community, and employees work together to pick the recipient or recipients.

"Meijer cares about the communities we serve, and our team members are the face of that commitment in our stores every day," said Rick Keyes, Meijer president and CEO. "We're humbled to see our team members' passion and support for these amazing nonprofits through Meijer Team Gives, because they are the core of who we are as a company."

Following last year’s inaugural campaign that netted nearly $3 million, the retailer expanded the program to include the six new Meijer locations that opened in the past year and to involve its team member resource groups. According to Meijer, seven stores that demonstrated the company’s commitment to community were given an extra $5,000 to give away; those stores are located in Howard, Wis., Lansing, Mich., Detroit, Mich. (a Rivertown Market banner), Manistee, Mich., Royal Oak, Mich., and Cold Springs, Ky.

Team members and donation recipients alike expressed gratitude for the opportunity. "We saw so much interest in volunteerism last year after the inaugural Meijer Team Gives, and it was amazing to see the way that our team members became involved with the organizations we chose, so we hope to spur similar interest this year," shared Tom Agrillo, store director for a Meijer in Fruitport, Mich. "The best part of bringing Meijer Team Gives back for a second year was seeing the program's growth, alongside the anticipation of our team members who were not only looking forward to it but even researching local organizations in their free time."

Danyele Easterhaus, executive director of Student Impact of Westfield in Westfield, Ind., shared the effect of the donation from the Westfield Meijer store. "Our afterschool programming and special events would not be possible without the help and support from Chad Clark and his team at Meijer," she remarked. "The team at Meijer really believes in our mission, and their financial support through Meijer Team Gives, as well as gift cards throughout the year enables us to provide more mentorship for the kids in our community, which builds trust and relationships and makes our community a better place."

Privately owned Meijer operates over 400 supercenters, neighborhood markets and Express locations throughout Michigan, Ohio, Indiana, Illinois, Kentucky and Wisconsin. The company is No. 20 on The PG 100, Progressive Grocer’s 2022 list of the top food and consumables retailers in North America.