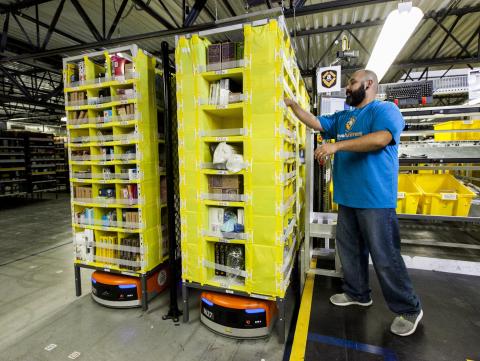 A sensational holiday shopping season has put Amazon in a “Prime’” position for even more growth just a few months before the company opens the doors to an ambitious new grocery chain.

The results were impressive considering that during the previous quarter, Amazon warned that $1.5 billion of investments in faster shipping times would weigh on its holiday quarter earnings. Instead, those investments paid off in the way of “record-breaking holiday sales” and an earnings report that catapulted shares of the ecommerce behemoth’s stock over a $1 trillion valuation as of Friday morning. Amazon shares were marked 8.8% higher in pre-market trading this morning to indicate an opening bell price of $2,042.51 each, the highest since Sept. 4.

Amazon is now the third-largest company in the S&P 500 by annual revenue.

“That is what we’re seeing — it’s not anything sudden, but the progress on a long-term strategy of ours,” Amazon CFO Brian Olsavsky said late Thursday during a fourth-quarter earnings call.

“Prime membership continues to get better for customers year after year,” Amazon CEO Jeff Bezos said Thursday. “And customers are responding — more people joined Prime this quarter than ever before. We’ve made Prime delivery faster — the number of items delivered to U.S. customers with Prime’s free one-day and same-day delivery more than quadrupled this quarter compared to last year.”

Amazon is investing in faster shipping and grocery delivery to fend off competitors such as Walmart, Kroger and Target, which are all aggressively moving to capture more share of the ecommerce grocery market.

Olsavsky says the company expects grocery delivery to grow even further in 2020 and beyond.

“Early results are good. Our grocery delivery orders from the combination of Amazon Fresh and Whole Foods Market more than doubled in the fourth quarter year over year,” Olsavsky said. “So we believe customers are starting to notice and take advantage of this. We will see where people's tastes and preferences will take them. Whether they go to the store or use Prime Now or Amazon delivery for their groceries. Right now, we're really just testing and reacting to the customer demand and the customer's preferences and will do so for the foreseeable future.”

During the fourth quarter, Amazon's physical-store sales, which includes the Whole Foods segment, dropped 1% to $4.4 billion. But considering the company's online grocery metrics, it seems that a lot of those brick-and-mortar grocery shoppers were staying home and shopping online.

On Thursday, financial services firm UBS issued a new report showing that Amazon and Whole Foods accounted for 2.2% of the U.S. grocery market in 2019, which is up from a 1.6% market share in 2017.

UBS said it expects Amazon to "cause disruption" this year when the company opens its first conventional brick-and-mortar grocery store.Amazon is quietly building and preparing to open a new grocery chain as it looks to change the way consumers shop for food. The new chain, separate from Whole Foods, is reportedly set to focus on pickup and delivery and will open later this year in Woodland Hills, Calif., in a former Toys R Us space of around 35,000 square feet.

Also on Thursday, research and advisory firm Brick Meets Click issued a report taking a look at how it expects Amazon to build out its growing grocery business. The online retailer will target affluent U.S. households, executing three key strategies: use Prime to push more purchases by affluent consumers, place grocery-driven stores in areas where they already have high-usage consumers, and grab shoppers with premium private label.

“Amazon blew all expectations out of the water during the holiday quarter,” said EMarketer principal analyst Andrew Lipsman. “Amazon’s increased profits during this quarter in the face of increased costs and competitive pressure in AWS was the real surprise.”

The company gave upbeat guidance for the first quarter, saying it now expects to report revenue between $69 billion and $73 billion.