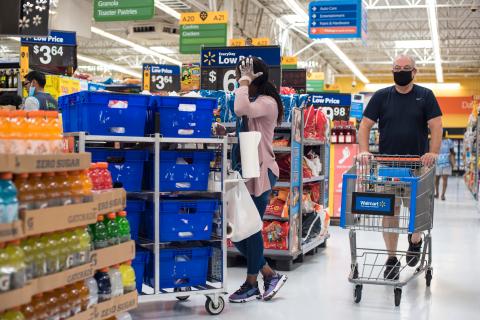 "In the U.S., customers clearly want to get out and shop," noted Walmart CEO Doug McMillon in reporting the company's Q1 financial results.

A first-quarter same-store sales increase of 6%, aided by federal stimulus payments and the continued strength of digitally enabled sales, has enabled Walmart to blow past analysts’ profit forecasts.

“This was a strong quarter,” said Walmart CEO Doug McMillon. “Every segment performed well, and we’re encouraged by traffic and grocery market share trends. Our optimism is higher than it was at the beginning of the year. In the U.S., customers clearly want to get out and shop. We have a strong position as our store environment improves and e-commerce continues to grow. Stimulus in the U.S. had an impact, and the second half has more uncertainty than a typical year. We anticipate continued pent-up demand throughout 2021.”

Walmart’s adjusted earnings per share for the quarter of $1.69 blew past the prior year figure of $1.18 and analysts’ estimate of $1.22.

A key reason for the exceptional profit performance was the mix of product sales. While Walmart said it gained market share in grocery, the overall category declined by low single digits as Walmart lapped the significant panty loading effect that occurred in the prior year first quarter at the onset of the pandemic. Conversely, sales of higher margin general merchandise categories such as apparel, home, outdoor living and sporting goods logged increase in the low 20% range.

Walmart U.S. president and CEO John Furner said the company was really pleased with its performance in food, especially categories such as meat, produce and bakery, all of which were singled out as areas where Walmart said it gained share based on Nielsen data.

Walmart’s Sam’s Club division also performed well, posting a 7.2% comp increase excluding fuel, a figure that would have been much higher were it not for a 340-basis-point negative impact due to reduced tobacco sales. Total sales increased 10.1% to $16.7 billion, with the gain balanced between 2.2% growth in total transactions and 4.9% growth in transaction size. Operating income increased 16.4% to $575 million.

Most notably, Sam’s Club said that its membership income increased 12.7%, a figure that bodes well for future sales growth, as the division's total member count is now at an all-time high.

As was the case with Walmart, Sam's profitability benefited from general merchandise sales. The home and apparel categories grew sales in the 50% range while the category defined as fresh/freezer/cooler grew in the mid-single digits. Consumable category sales were up low single digits and grocery and beverage were up high single digits.

While sales at Sam's Club and Walmart benefitted from the massive stimulus the federal government injected into the economy during the first quarter, company executives were unable to quantify the impact during a call with analysts shortly after earnings were release the morning of May 18.

CFO Brett Biggs on several occasions mentioned the stimulus clearly had an impacted, he also noted that Walmart's underlying business is strong.

Bentonville, Arkansas-based Walmart operates more than 11,300 stores under 58 banners in 27 countries, and e-commerce websites, employing 2.2 million-plus associates worldwide. Walmart U.S. is No. 1 on The PG 100, Progressive Grocer’s list of the top food and consumables retailers in North America, while Walmart-owned Sam’s Club ranks No. 9 on the list.