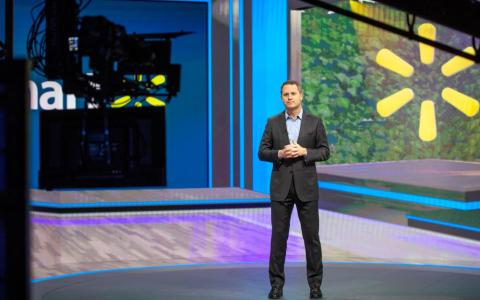 A radical transformation is underway in Bentonville, Ark. Walmart senior executives are pursuing a growth strategy that leverages the retailer’s unique collection of assets and brand equity with elements of Amazon’s approach, and a dash of Kroger and Albertsons.

“Think about it as a flywheel that’s spinning, powered by a mutually reinforcing set of assets,” is how Walmart President and CEO Doug McMillon describes the business model that he sees emerging in the years ahead. “We’re starting to drive the top and bottom line in more expansive ways. Our bottom line is becoming more diversified, which will enable us to generate more operating income growth over time.”

Diversification means that Walmart plans to make money in ways that would have been seen as heresy just 10 years ago. To get investors excited about the growth prospects for a $560 billion global business, however, requires fresh thinking about new sources of revenue. So Walmart is focused on scaling businesses such as its marketplace and fulfillment services, advertising, financial services, data monetization and last-mile delivery, even as it increases the productivity of its existing selling space. 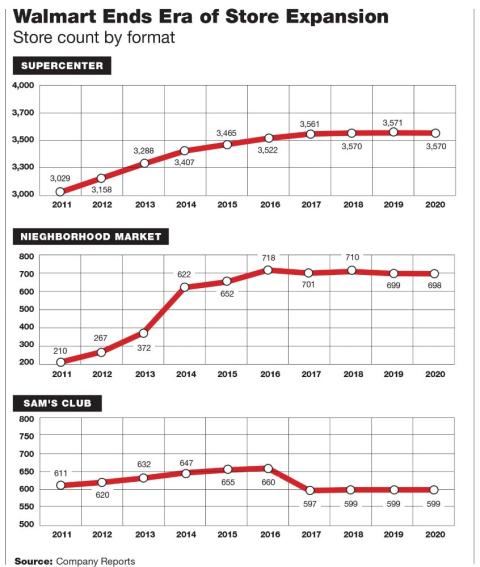 A spinning flywheel with mutually reinforcing assets doesn’t have quite the same ring to it as the productivity loop, a concept Walmart spent decades refining and highlighting as the driver of its success. The concept was simple and involved aggressive expense control, which enabled everyday low prices, which simplified the supply chain, which improved in-stock levels and drove sales, which enabled expenses to be leveraged to drive growth. Adherence to the concept of expense control, simplified operations and low prices proved to be a powerful combination. Walmart gained market share and transformed the complexion of the retail industry, and then the food retailing industry, with the expansion of supercenters.

A flywheel is another matter entirely and represents more of a long-term vision of where Walmart sees itself and the potentially disruptive role it will play in various businesses.

According to McMillon, who, along with other top executives, shared their vision of Walmart’s evolving business model in conjunction with the release of the company’s fourth-quarter results in late February, 2020 was a confirmation of that new vision.

“We feel emboldened and are now moving with even more speed and aggressiveness,” McMillon said at the time. “We’re scaling new capabilities and businesses and designing them to work together in a mutually reinforcing way. As we imagine the future, we believe our customers will want an even better value for their money; a merchandise assortment that is relevant to their life and seems limitless; services that help them save time, save money, and get or stay healthy; an experience that is easy and enjoyable. And the knowledge that the company they do business with can be trusted to treat everyone in their supply chain well and take actions that strengthen our planet.”

The vision that McMillon shared is the boldest since he assumed leadership of the company in early 2014. He believes that shoppers will value compelling store experiences while e-commerce continues to grow, but for an increasing number of customers, Walmart will be viewed as a service.

“Customers will think of us as the merchant that serves their wants and needs, but in ways that take less time and effort,” McMillon said. “We won’t just be utilitarian for them. We’ll serve up items and ideas that are relevant and exciting. We’ll reach them directly and through other platforms.”

Those other platforms, health and wellness and financial services, for example, are things that Walmart can weave together in a seamless way, McMillon contends. “We’re in an early stage of building a new business model that will enable us to serve people how they want to be served in any particular moment, and thrive in the next generation of retail. We believe the big winners in retail will be those that deliver a unique interrelated ecosystem.”

Between talk of mutually reinforcing flywheels and interrelated ecosystems, one can lose sight of the fact that for the immediate future, Walmart is primarily an operator of physical stores that generates roughly 60% of its sales from food and consumables. It ended last year with 3,570 supercenters and 698 Neighborhood Market stores, and offers same-day delivery and pickup service from more than 3,000 locations.

Walmart has experienced its share of challenges during the pandemic, most notably with supply-chain disruptions leading to in-stock challenges that caused the company to lose market share, according to some analysts. Nevertheless, Walmart’s U.S. sales increased 7.9% to $99.6 billion in the fourth quarter and increased 8.5% to $370 billion for the full year. Those aren’t huge percentage increases, but when a single-digit increase comes on top of an already massive sales base, the additional volume can be substantial. For example, Walmart added $7.3 billion in sales during the fourth quarter, and for the full year it added nearly $29 billion in sales, a figure that would rank it No. 1 on The PG 100, Progressive Grocer’s 2020 list of the nation’s largest retailers of food and consumables.

The top-line growth flowed through to the bottom line, too, even with pressure from a wide range of COVID-19-related costs, putting Walmart in a position to increase investments. Its fourth-quarter operating profits for the U.S. business increased 17.4% to $5.2 billion, and full- year operating profits increased 10% to $19.1 billion.

With that kind of momentum, Walmart plans to increase its capital expenditure budget by 36% this year to roughly $14 billion, compared with levels the past five years between $10 billion and $11 billion.

The bulk of the increase will be spent in the United States, according to CFO Brett Biggs, who said that the focus will be on supply chain, automation, technology and a broad category described as customer-facing initiatives.

“Over the next few years, we expect [capital expenditures] to be around 2.5% to 3% of sales,” Biggs said. “While this is higher than the past few years, it is far below the cap ex peak of 4% to 5% of sales during the period of heavy supercenter growth.”

That heavy growth period came during a five-year period that began in 2003, when Walmart added more than 200 supercenters annually. The peak occurred in 2006, when 276 supercenters were added and Walmart’s cap ex budget was $15.7 billion.

In recent years, the number of supercenters has remained flat as Walmart shifted its cap ex budget to areas that improve efficiency and technology. For example, the company is currently doing about 1.5 million deliveries each week from stores, a seven-fold increase from the prior year, according to John Furner, president and CEO of Walmart US. However, to make money in digital grocery, Walmart and other retailers are racing to deploy automated solutions that improve picking processes. Walmart is betting on a concept called “market fulfillment centers,” or MFCs, which are capable of storing and picking refrigerated and ambient items.

“Market fulfillment centers make the [picking] process significantly faster and more profitable,” Furner explained. “They move a significant amount of the picking off the sales floor, allowing us to do more within the box. We’re now moving to scale these locations, and we expect to have over 100 of these within the next couple of years. And in some stores, we’ll carve out existing space for them; and at others, we’ll add on; and in some cases, we’ll build stand-alone units.”

In addition to MFCs, which are referred to by others in the industry as micro-fulfillment centers, Walmart plans to invest in conventional distribution centers and e-commerce fulfillment centers, but didn’t elaborate on what portion of its resurgent cap ex budget would be allocated to those areas. 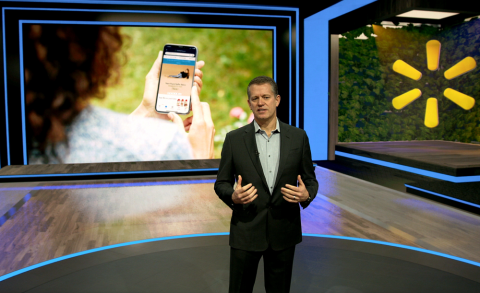 Listening to Walmart executives talk about future growth opportunities and even use of the word “flywheel” is a lot like listening to Amazon. Walmart is focused on providing a high-quality experience for those who join its Walmart+ membership program, and McMillon said the retailer plans to enhance the offering of benefits over time. The company is intent on expanding its marketplace business by bringing more sellers onto its platform, and plans to make money offering Amazon-like “fulfilled by” and other seller services such as the Walmart Connect advertising platform.

“Five years from now, we expect to be well within the top 10 advertising platforms in the U.S., ahead of big players like Hearst, Fox and Twitter,” noted Furner.

Another big alternative opportunity, according to McMillon, that is part of the shift in philosophy to make money in ways other than the sale of products involves data monetization.

“Data is obviously really valuable, and we’ve got a history of giving our data away to suppliers,” McMillon said. Walmart did so because it helped improve in stock, and it also empowered suppliers to develop sales-generating initiatives, since they weren’t being charged for access to data. “Some portions of our data will continue to be free because we need [suppliers’] help serving our mutual customers, but there are other aspects of our data that are really valuable and can be put to work in ways that we haven’t before. The concept of building digital products that we can use internally and also monetize outside is a really exciting prospect.”

Day One at Walmart

Before Amazon founder and CEO Jeff Bezos used the phrase “day one” in annual letters to shareholders to reinforce the company’s startup mentality, employing a day-one mindset was a Walmart thing. Specifically, it was Walmart founder Sam Walton’s thing. He had a knack for disrupting the company’s operations before competitors could. Each of Walton’s successors, from David Glass to Lee Scott and Mike Duke, maintained a similar view, but none expressed it as forcefully as McMillon, who sees opportunity in areas that could have Walmart looking like a very different company within the decade.

“I’ve been a part of Walmart for more than 30 years now, and I can't remember a time when there was so much exciting change happening inside our company,” McMillon said. “In the 1990s, I remember [Glass] telling us repeatedly that the company was just getting started. Every time I’d hear him say it, I would think, really? We were already large by then, and so much had already happened.”

Today, McMillon shares a similar message of future opportunity, if Walmart can become more aggressive, go faster to capitalize on its financial strength and momentum, and drive sales and profits in more expansive ways.

“We have the talent, the culture and the assets to thrive in the next generation of retail and to invent it,” McMillon asserted. “We’re building a new customer-centric business model.”