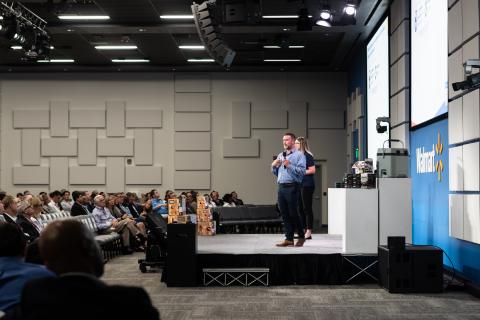 Walmart Inc. is continuing its commitment to sourcing products from U.S. manufacturers as it wraps up its ninth annual Open Call. During the event, finalists representing all 50 states pitched their products through 30-minute, one-on-one virtual and in-person meetings at Walmart’s headquarters in Bentonville, Ark.

Of the 1,100 businesses that pitched their products to be sold by the retailer, more than 330 resulted in a deal and about 280 are being considered for potential future deals. Products chosen will be available on Walmart or Sam’s Club shelves, online at Walmart.com or on Walmart’s Marketplace.

“Investing in U.S. manufacturing is not only the right thing to do for the country’s long-term economic health, it's the right thing to do for customers today who are dealing with historic inflation,” said Doug McMillon, president and CEO of Walmart. “We’re excited that more and more great products at strong price points are being produced in the U.S. Our $350 billion investment in items made, grown or assembled in the U.S. helps deliver our customers the goods they need, when they need them, at affordable prices, while supporting the creation of more than 750,000 jobs.”

Walmart’s largest-ever Open Call event was part of its commitment to spend $250 billion over 10 years on products made, grown or assembled in the U.S. Though the pledge was made in 2013, the retailer announced this week that it has already met that goal.

This year’s event offered small-business owners the opportunity to hear directly from Walmart executives and merchants, and breakout sessions helped them learn more about the resources available to them.

“We’ve met so many amazing small business owners through Open Call over the years, and this year is no exception,” said Scott Gutche, senior director, U.S. Manufacturing. “From Catrina’s Kitchen Southern Seasoned Flour to EZ-gro’s Spicy Salad Mix, Microgreen Growing Kit, we’re so excited about the new products and people that will be joining the Walmart supplier family.”

Each week, approximately 230 million customers and members visit Walmart’s more than 10,500 stores and numerous e-commerce websites under 46 banners in 24 countries. The company employs approximately 2.3 million associates worldwide. Walmart U.S. is No. 1 on The PG 100, Progressive Grocer’s 2022 list of the top food and consumables retailers in North America, while Sam’s Club ranks eighth.