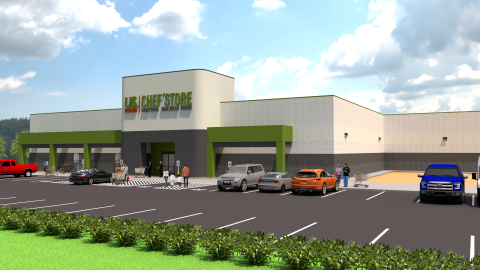 US Foods is covering more geographic ground with the addition of new Chef'Stores in California, Montana and North Carolina.

US Foods is whipping up a batch of more Chef'store locations. The foodservice distributor announced that it is planning new stores in Merced and Santa Cruz, Calif., Helena, Mont., and Winston-Salem, N.C.

The additions reflect US Foods’ growing retail presence as the company widens its offerings for culinary professionals and consumers. Slated to open this fall, the latest California sites will bring the number of Chef’stores in that state to 17. The Merced store at 3275 R Street will span 19,000 square feet, while the Santa Cruz location at 1660 Commercial Way is coming in at 23,000 square feet.

The 20,000-square-foot Chef'store in Helena is the third in Montana and will open early next year at 2885 N Sanders St. On the other side of the country in North Carolina, the 23,500-square foot Winston-Salem location will welcome customers at 140 Stratford Commons Court starting in December. That will be the second Chef’store in North Carolina.

In addition to serving as a warehouse-style store for restaurant pros, Chef’stores also attract community groups and at-home chefs. The stores carry equipment as well as ingredients by the case and in individual quantities. Among other offerings, the locations sell restaurant-quality fresh meat, produce, dairy, deli items, frozen seafood and beverages at competitive prices.

“The new Chef’stores will offer foodservice operators across Northern California, Montana, and North Carolina a new and convenient retail location for purchasing their much-needed food and supplies,” said John Mathews, VP of sales and marketing for Chef’store. “Merced, Santa Cruz, Helena, and Winston-Salem have a growing community of restaurant owners and culinary professionals. Chef’store is excited to help serve their needs with thousands of restaurant-quality products at competitive prices.”

It’s been a busy 2022 thus far for this US Foods venture. Three new Chef’stores have recently opened in Visalia, Calif., Lynchburg, Va., and Spartanburg, S.C. With the addition of the four new stores, the company will operate 87 Chef’Store locations around the U.S.

Earlier this summer, the company also announced that it is teaming up with hydroponic indoor vertical farming company Kalera to bring more year-round, high-quality produce to the market.