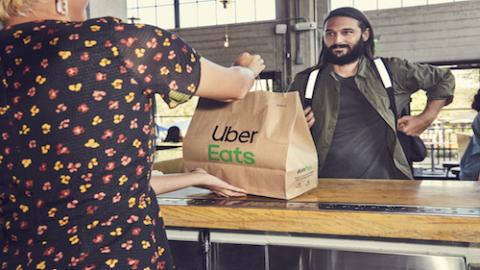 It's been a busy week so far for Uber, which just struck a deal to buy delivery service Postmates.

Uber is launching a grocery delivery service in the United States, along with parts of Canada and Latin America.

The effort is fueled via a partnership with Cornershop, a Chilean grocery delivery startup. The news, announced Tuesday, comes a day after Uber said it would buy food delivery service Postmates.

This new Uber-backed service is available to consumers "in select cities in Latin America, Canada," the company said. Later this month, Uber added, U.S. shoppers "can find grocery delivery opportunities through both Uber and Uber Eats apps, furthering Uber’s vision of bringing people closer to the things they need, all in one place."

This news could help Uber capture even more of the food delivery market — a task that has taken on more importance because of the decline in ride-share business during the pandemic. According to one estimate, Uber Eats and Postmates will control 37% of the U.S. food delivery market, trailing DoorDash, which has 45%. In April, gross bookings for Uber rides were down 80% year over year. By contrast, business for food deliveries increased 50%.

"Today’s product integration marks an important step in our partnership with the team at Cornershop to bring grocery delivery to millions of consumers on the Uber platform," said Raj Beri, Uber’s global head of grocery. "Uber started on the premise that people should be able to more easily get to the places they need to go, and to people they care about. This has since evolved to connecting people to food from their favorite local restaurants, and we are thrilled to bring our product expertise to the world of grocery alongside the Cornershop team."

With this service launch, grocery orders placed on Uber and Uber Eats will be facilitated and delivered by Cornershop team members. Just like ordering a ride or a meal with Uber, customers can follow their grocery delivery at each step of the process, the company said.

"We launched Cornershop almost exactly five years ago today, and it's hard to imagine a better way to celebrate our anniversary than joining forces with the best on-demand platform around. We couldn’t be more excited to work with Uber to take our mission to millions,” said Oskar Hjertonsson, founder and CEO of Cornershop. “Uber is the perfect partner to bring on-demand groceries from incredible merchant partners at the touch of a button across the Americas.”