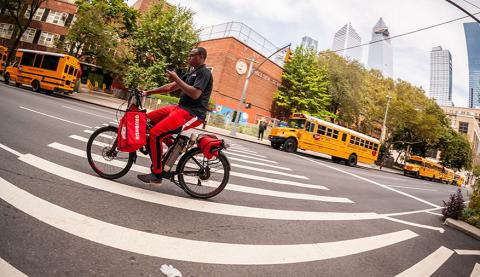 Expect more excitement in the online food delivery space — but how much of that serves to boost profit remains in question.

This week’s main drama, of course, was the news that Chicago-based GrubHub would combine with Amsterdam-based Just Eat Takeaway.com to form what promises to be an international food delivery force. The deal put to rest any anticipation that Uber and GrubHub would join forces in the growing online food delivery game — a potential partnership that was already raising significant antitrust concerns, given that the combined operation reportedly would control 55% of the U.S. food delivery market.

Regular, robust profits still remain a dream for many operators in the space, even as the pandemic pushed more consumers to try those online food delivery services or use them more often while restaurants closed and officials set stay-at-home mandates. It was only late last year, after all, that investors sent GrubHub’s stock price sinking by some 40% after the service warned about lower revenue and income. And now, as industry observers have noted, price competition among those delivery providers remains fierce as they try to iron out persistent logistical problems.

That doesn’t mean that investors have cut off capital, however.

For instance, DoorDash is set for an injection of funds that would value the San Francisco-based company at no less than $15 billion “as a wave of deal-making sweeps over the red-hot industry,” according to a report this week from The Wall Street Journal. DoorDash had 47% of the U.S. food delivery market as of April, according to Edison Trends, putting it ahead of GrubHub and Uber Eats. And despite not landing that deal with GrubHub, Uber remains on the hunt, according to a statement from the company, also based in San Francisco.

Major consolidation has been expected to increase in the food delivery space for a while now. This week’s GrubHub deal has led to even more expectations. “Competition and pricing pressure will be fierce going forward,” Daniel Ives, managing director of equity research at Los Angeles-based Wedbush Securities, told The New York Times, adding that GrubHub held about 24% of the U.S. market for online food delivery services.

The new GrubHub deal comes amid a broader wave of mergers and acquisition. Global law firm Linklaters said that over the last two years, the food delivery space was home to 25 such deals, with a combined value of $20.12 billion. As for the GrubHub-Just Eat Takeway deal, the two companies said that the combined online food delivery company will be the largest measured by gross merchandise value and revenue, at least outside of China. GrubHub currently features nearly 300,000 restaurants in more than 4,000 cities, and includes the Seamless, LevelUp, AllMenus and MenuPages brands.

Even as online food delivery services combine and expand, restaurants are increasingly complaining about the costs of offering such services. Indeed, during the pandemic, it wasn’t difficult to find efforts on social media or restaurant websites to encourage consumers to order directly from those restaurants that offered their own deliveries. Such campaigns resembled in part the “buy local” trend that seems to have gained meaningful traction during the COVID-19 outbreak, including in the broader area of food retail, not just with restaurant deliveries. The new combined company of GrubHub and Just Eat Takeaway.com, along with its many competitors, will have to deal with that challenge as well, another obstacle to revenue, profits and growth.

Indeed, in the wake of the new deal, one industry player described that challenge in a sharp way. “Assuming Just Eat did its due diligence, they know they paid billions for GrubHub’s horrible reputation among restaurant owners in New York City and around the nation,” said Andrew Rigie, executive director of the NYC Hospitality Alliance. “GrubHub’s new corporate owners now have a responsibility to change the company’s predatory practices and improve relationships with restaurants.”