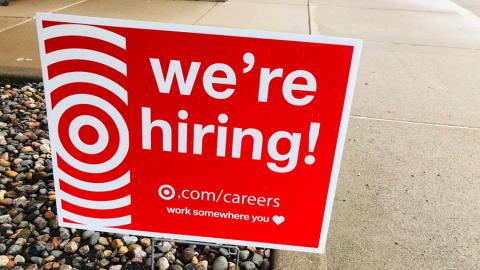 A hiring sign placed outside a Plymouth, Minn., Target store

Target Corp. has revealed plans to add more than 130,000 seasonal employees nationwide for the impending holiday season, doubling the number of jobs focused on fulfilling digital orders from its stores. Further, the retailer will offer existing associates additional hours based on their preference and availability.

“It’s critical we build the right team across our stores and supply chain to deliver an exceptional holiday experience for our guests during the busiest time of the year,” said Melissa Kremer, Target’s chief human resources officer. “From engaging our current team members who are interested in extra hours, to adding more than 130,000 seasonal hires, we continue to invest in our team because they make it easier and more joyful to shop at Target, especially during the holidays.”

In 2018, Target hired 120,000 seasonal employees at its stores and 7,500 at its distribution and fulfillment centers. More than 40 percent of those hires stayed with Target after the holidays.

Additionally, Target again will honor associates who work during the holiday season under its work.win.give appreciation program, now in its second year. At each of the company’s stores and distribution centers, two hourly employees will be chosen at random to receive a $250 Target gift card and the chance to contribute $250 to a local charitable organization of their choice.

To find its seasonal workers, Target will host two rounds of hiring events at its stores, the first event Oct. 11-13 and the second Nov. 2-3.