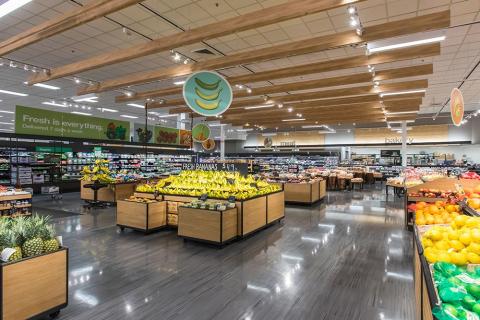 Target's food and beverage sales grew by more than 20% in the first quarter.

So many digital grocery shoppers are shopping Target that the retailer is accelerating its online grocery efforts to meet the crush of demand.

In a first quarter earnings call, Target COO John Mulligan said that shoppers are asking for more fresh food from its Drive Up curbside pickup service. As a result, the retailer is currently in the process of adding additional Drive Up parking spots to store lots nationwide and adding temperature-controlled, fresh/frozen storage space in stores to facilitate more online grocery orders.

“Drive Up accelerated to 1,000 percent growth in the month of April,” Mulligan said. “You’ll see us add parking slots over the next several months and adding incremental storage space for the store teams. Our plan now is to accelerate this to get it in as many stores as possible over the next several months because clearly it’s something that our guests would like our stores to deliver.”

The push to accelerate grocery pickup comes a few months after the retailer said it was pausing "incorporating fresh grocery and adult beverages into Order Pickup and Drive Up services until later, when the team has more time to train and prepare for the changes. We’ll revisit these projects and set new date." Now it seems that overwhelming demand for grocery pickup has led Target to not only restart but accelerate efforts to add as much fresh food into its pickup services as possible.

Target said its digital sales growth accelerated from 33% in February to about 100% in March to 282% in April, for a total first quarter e-commerce increase of 141%. Target’s same-store sales grew by 10.8% in the first quarter ended May 2, compared to the same period a year prior.

Target said its stores enabled digital volumes totaling more than 80% of the e-comm sales in April, totaling more than $1.1 billion compared with last year. Store fulfillment accounted for more than $950 million of that growth as both same day services and shipments to guest homes saw significant increases. Its same-day services, including Drive Up and Shipt delivery, grew by 278%.

Given that the last mile is the biggest cost driver within digital, the opportunity to control those costs will play an important role in operating margins over time, Mulligan said. To this end, the retailer plans to test a new "sort center" concept.

"We will begin testing the addition of sort centers downstream of our stores within our fulfillment network," Mulligan said. "These centers, which we expect to be smaller than our average store, will be placed downstream in select markets in which we have a high density of packages being sent to U.S. homes by eliminating the need to store packages in the individual stores. The thru-put of packages from these locations would naturally increase and we can achieve lower average shipping costs through the scale and route optimization that these downstream centers will provide. Given that we only recently acquired this new technology, we don't yet have a timeline for this test."

Mulligan said Shipt had 60% growth in membership in the first quarter, and a 300% increase in sales through Shipt compared to the prior year quarter.

As far as merchandise category performance during Q1, the retailer’s food and beverage categories grew by more than 20% in the first quarter, and private brands was a big reason for that, CEO Brian Cornell said.

“An important part of that 20% growth was Good & Gather,” Cornell said. “As we move into the second quarter we will be expanding the number of Good & Gather items. We feel really good about the guest response during the pandemic and we expect that to continue into the balance of the year.”

Cornell then paused and thanked Target’s national brand vendors for their efforts during the “unprecedented quarter of growth.”

“Our national branded vendors did a superb job of working hand-in-hand with buyers and our supply chain teams in food, beverage and essentials to meet the demand and get us the product we needed,” he said.

In other merchandise categories, Target said essentials and beauty were up in the high teens during the period. Apparel was down by about 20%. Hardlines were up more than 20%.

During the first quarter, the cost of the increased wages, enhanced sanitation protocols and other expenses related to the pandemic totaled about $500 million, Cornell said. During the quarter, Target said net income fell to $284 million, or 56 cents per share, from $795 million, or $1.53 per share, a year earlier. Excluding some items, Target earned 59 cents per share.

Despite the extra costs, Cornell said the retailer “expects to gain a long term benefit in terms of guest loyalty.”

“During the first quarter, more than 5 million guests shopped on Target.com for the first time, with more than 2 million of those guests making their first Drive Up trip,” Cornell said. “Because of the amazing flexibility our team, we saw consistently strong levels of satisfaction with the Target.com shopping experience, even in the face of a crushing increase in demand.”

Target now has more than 70 million people who have signed up for Target Circle, its smartphone app.

Due to the pandemic, Cornell said Target is now focused on taking steps to make both employees and shoppers feel safe at Target.

“We'll continue to focus on our teams investing in their safety and their well-being while working to remove obstacles that allow them to serve guests during this critical time,” he said. “Looking ahead, we'll continue to quickly adapt to changes in the environment and emerging guidance from the CDC. There’s going to be a premium on creating a safe, sanitized shopping environment.”

Cornell also said the retailer would not be raising prices in the way that other retailers have.

The company withdrew its financial outlook for the full year and first quarter in late March because of COVID-19.