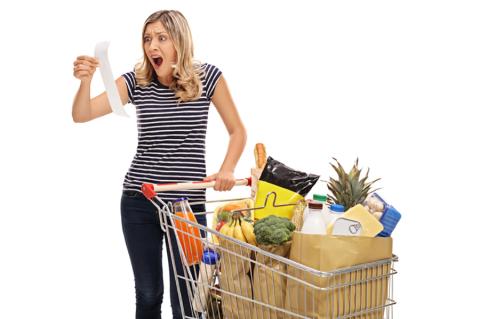 Nixon was still president when grocery prices jumped so high

U.S. grocery prices jumped 2.6% in April, the largest one-month increase in more than a generation, according to new figures Tuesday from the U.S. Department of Labor. Meat and egg prices helped drive up grocery costs as consumers responded to COVID-19 stay-at-home mandates by stocking up on food.

That’s the largest one-month percentage increase for grocery prices since February 1974, the federal agency said. The prices of meats, fish, poultry and eggs increased 4.3% last month. Fruit and vegetable prices increased 1.58%; cereal and bakery items 2.9%; and dairy products 1.5%. Overall, the Labor Department said that U.S. prices in general decreased 0.8% percent, thanks in large part to the severe drop in oil and gasoline prices.

“Food price gains were robust as we know there are empty shelves out there,” Peter Boockvar, chief investment officer at Bleakley Advisory Group, told CNBC. “Demand we know in most areas of the economy has collapsed and prices are falling in response.”

Food retailers are reporting significant first quarter 2020 financial gains, even though the pandemic restrictions did not really kick in heavily until the latter part of that period. A recent example of that trend came Tuesday from Grocery Outlet Holding Corp. It reported a first quarter revenue gain of 25.4%, to $760.3 million. Comparable-store sales grew 17.4%, compared to a 4.2% increase for the same period last year last. Further, CEO Eric Lindberg noted that the discount grocer was poised to thrive when the current health crisis winds down.

Meanwhile, brands active in the food retailer space are trying to gain sales via direct-to-consumer (DTC) methods, some of them tailored specifically to recent retail shifts brought upon by the COVID-19 pandemic. For example, PepsiCo on Monday launched two DTC websites, PantryShop.com and Snacks.com, “where shoppers can order an assortment of PepsiCo's trusted and loved food and beverage brands,” the company said.

Price-gouging lawsuits have also reached some U.S. courtrooms, and it seems a good bet that more will come. Eggs are playing a big role in those allegations.

The shoppers who filed a recent lawsuit In Texas, for instance, reportedly want a “permanent injunction to stop the defendants from selling eggs at rates higher than 10% of the price before the disaster declaration,” as well as unspecified damages. Food retailers and at least one large egg provider have denied those allegations. “There has always been great volatility in the egg pricing market,” egg provider Cal-Maine Foods said. “The COVID-19 pandemic caused a massive disruption in every sector of the economy, including the egg industry. Retail demand for eggs reached historically high levels and egg prices increased significantly in line with those demand trends. However, egg prices have since declined quickly to pre-COVID-19 levels.”