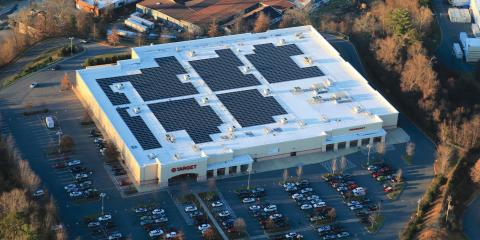 Target recently completed a solar rooftop installation on its Napa, California, store, which marked a much bigger milestone for the company. This installation was Target's 500th location — both stores and distribution centers — with onsite solar.

In 2015, the retailer made a commitment to add rooftop solar panels to 500 stores by 2020, so the latest update indicates it is ahead of schedule. Target's larger goal is to have 100% of its electricity from renewable sources by 2030, and the company says it is a quarter of the way toward reaching that mark.

“At Target, we’re committed to making our operations even more sustainable to create a better future for our guests, team members and the planet,” says John Leisen, VP of property management, Target. “Ambitious energy goals have helped us accelerate our progress and reach major milestones. And we’ll continue to invest in technologies, partners and resources to help us achieve even more.”

So far, the rooftop installations have added more than 240 megawatts of solar across the buildings, equivalent to powering nearly 46,000 U.S. homes. Target says that each project generates enough energy to offset 15% to 40% of a property's energy needs.

The retailer has been honored by the Solar Energy Industries Association (SEIA) as a top U.S. corporate installer for five years in a row and is also a four-time Energy Star Partner of the Year.

“For years, Target has led the way on corporate solar adoption, helping to create a cultural shift in how top companies power their operations,” said Abigail Ross Hopper, president and CEO of SEIA. “Companies such as Target have the power to make lasting change and we’re thrilled to see Target double down on their commitment to solar energy.”

Minneapolis-based Target Corp. operates 1,800 stores and an ecommerce site, Target.com. The company is No. 15 on Progressive Grocer’s 2019 Super 50 list of the top grocers in the United States. Seattle-based Amazon, as its wholly owned subsidiary Whole Foods Market, is No. 10 on the list.