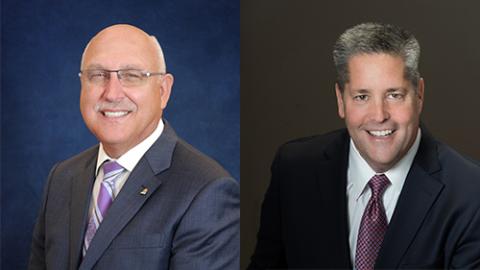 Stater Bros. Markets' longtime president, George Frahm, is retiring after 47 years with the company, effective Oct. 31. Industry veteran Greg McNiff, who has worked for Albertsons for 38 years — most recently as the grocer's Portland division president — will take over the role at Stater Bros.' helm.

Frahm started at Stater Bros. in 1973 at the company's Glendora, Calif., location as a clerk's helper and janitor before rising through the ranks.

“I have been blessed to work at Stater Bros. for my entire career and have had the opportunity to advance from entry-level positions to company president,” said Frahm. “I look forward to spending more time with my wife, Debbi, and traveling."

McNiff will officially join Stater Bros. Markets on Sept. 3, before assuming his role as president on Nov. 1.

“I have had the privilege of knowing George for many years through our affiliation in various food industry organizations and events,” said McNiff. “I have tremendous respect for George and his leadership style, and realize I have some huge shoes to fill. I look forward to joining the Stater Bros. ‘Family,' and returning ... to Southern California."

McNiff began his career in 1981 at a former Albertsons location in Cypress, Calif., and worked in the Southern California market for 27 years.