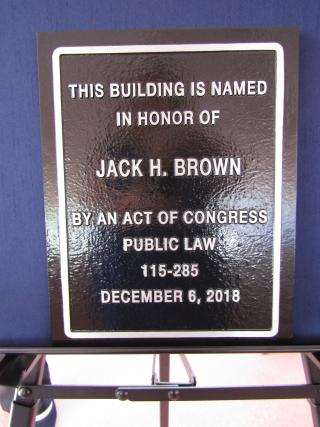 A dedication ceremony to celebrate the renaming took place at the building on April 22.

“Jack was a devoted husband, father and grandfather to his family, and an advocate for the Inland Empire community for over three decades,” noted Stater Bros. Chairman Phillip J. Smith. “His efforts on behalf of San Bernardino County workers and families will be carried on by those who were fortunate to know him, and we hope that through this new dedication, his name will be with us and remembered for generations to come.”

Brown died in 2016 at the age of 78. The San Bernardino native was a Navy veteran who had started his grocery career as a box boy at the age of 13.

The bill to rename the post office, H.R. 2979, was first introduced by Rep. Pete Aguilar, D-Calif. 31st District, in June 2017, with the support of 50 members of California’s congressional delegation, and officially signed into law by President Donald J. Trump last December.

The largest privately owned supermarket chain in Southern California, Stater Bros. operates 172 supermarkets and employs about 17,000 associates. The company is No. 21 on Progressive Grocer’s 2018 Super 50 list of the top grocers in the United States.