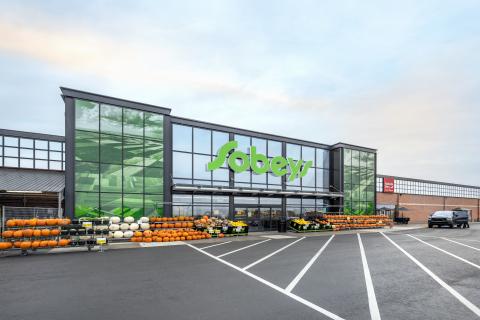 In a Flexstore like Sobeys Orangeville, all of the fixtures used are flexible and ready to plug in, thanks to an elaborate system in which the building services are fed from the ceiling into the counters and fixtures.

Sobeys has opened a store in Orangeville, Ontario, that, according to Zurich-based design and shopfitting company Interstore | Schweitzer, “is a completely new brand experience that will break new ground and set it apart from the competition.” The location’s debut marks the first time that Interstore | Schweitzer’s Flexstore concept has been implemented in North America.

In a Flexstore, all of the fixtures used are flexible and ready to plug in, thanks to an elaborate system in which the building services, including water and electricity, are fed from the ceiling into the counters and fixtures. Fresh food counters and refrigerated units can be flexibly outsourced according to this principle and docked onto other areas as required. For instance, the pizza counter can easily be replaced by a salad bar by simply moving and exchanging the counters. The concept thus enables a retailer to change counters and entire departments quickly and easily, including from service to self-service, without incurring major construction costs.

“The aim of the project was to translate the new brand concept of Sobeys into a suitable store format and to set innovative accents that will flow into further projects in the future,” noted Interstore | Schweitzer, which designed and implemented the new prototype. “The final concept, which relies on a modified customer flow and a flexible store layout, will serve as a guideline for other stores. Hence, the customer journey leads the shopper in a circle through the fresh food departments, which are positioned along the walls of the store. In the center of the store, gondolas with dry goods are positioned where the customers can focus on their rational shopping list.”

The store design also highlights product presentation, accentuated by lighting from Milan-based Imoon that illuminates various departments to create a different ambiance for each area. The technologically advanced light fixtures have resulted in energy savings of 30%-40%, according to the companies.

Based in Stellarton, Nova Scotia, Empire Co. Ltd. is a Canadian company with key businesses in food retailing through its wholly owned Sobeys chain and related real estate. Canada’s second-largest retail group, with more than 1,500 supermarkets in all 10 provinces, Sobeys Inc. is No. 22 on The PG 100, Progressive Grocer’s 2021 list ofthe top food retailers in North America.