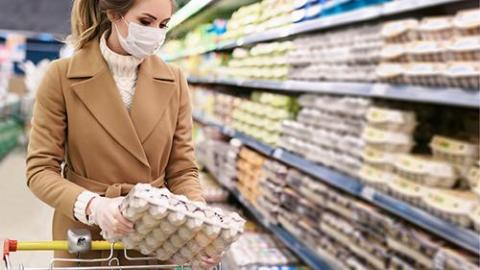 Sixty-six percent of shoppers reported wearing a mask while shopping. Mask usage has doubled since early April and is most popular among shoppers in the Northeast.

Ongoing health concerns about COVID-19 have consumers confused about what “normal” will look like in the future and how soon it arrives, according to the latest research from sales and marketing agency Acosta.

The firm surveyed Americans in early May, its fifth installment in COVID-19 related research, and found slightly more than half of shoppers expect life to return to normal in less than six months but that new behaviors have also become normal.

“Three months into the pandemic, consumers are not surprisingly seeking the light at the end of the tunnel, but not all are optimistic about, or supportive of, a quick return to normalcy due to continuing health concerns," said Darian Pickett, CEO of Acosta. "With shoppers settling into their new routines, 'normal' life will not look like pre-COVID-19 life, at least not entirely.”

For example, Acosta’s research shows that bringing reusable bags to stores may become a thing of the past and using hand sanitizer and masks while shopping is likely to remain common practice even after the pandemic subsides. Other highlights of the research include:

Acosta's research was gathered via online surveys with responses coming from the firm’s proprietary shopper community. The latest round of research is blended with data from surveys conducted during the course of the pandemic April 17-23, April 3-7, March 20-29 and March 6-12 in a full report.