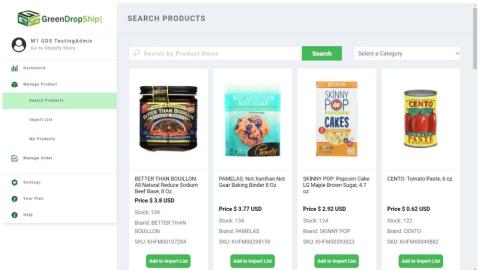 GreenDropShip's app for Shopify enables merchants to add natural and organic grocery products to their online stores and automate their order fulfillment.

U.S.-based supplier GreenDropShip is making it easier for retailers to tap into popular online grocery with its new e-commerce app for Shopify that enables merchants to add natural and organic grocery products to their online stores and automate their order fulfillment.

According toWinston-Salem, North Carolina-based Inmar Intelligence,nearly 80% of U.S. consumers purchased groceries online at the height of the COVID-19 pandemic, and this trend is expected to continue.

Currently, the only app for selling groceries on the e-commerce platform Shopify, the GreenDropShip App allows store owners to import products into their Shopify stores with the single click of a button.

The app not only enables Shopify sellers to gain access to brand-name grocery products, it also automates their e-commerce stores. Merchants no longer have to worry about fulfilling orders, since the app is designed to ship products directly to the final customer's front door.

"We created the GreenDropShip App to offer Shopify merchants a way to have seamless automation," explained Allen Kaplun, co-founder of Lebanon, Pennsylvania-based GreenDropShip. "It saves time and spares online resellers the expense and hassle of hiring a developer to build a solution, so Shopify merchants can save thousands in development costs."

GreenDropShip is considered a dropshipping supplier, meaning that it stores, packs and ships all merchants’ orders directly to their customers from its facilities in Los Angeles, Dallas-Fort Worth and Pennsylvania.

Online merchants using GreenDropShip's app get access to more than 20,000 natural and organic products, which, in addition to food and beverages, includes an extensive selection of premium vitamins, supplements, baby products, beauty and body care items, and household supplies. The app is available now in the Shopify App Store.

Ottawa, Ontario-based Shopify has partnered with some big names in the past year.

For example, Walmart teamed up with Shopify to allow its sellers to use the Walmart Marketplace, adding more than 1,200 Shopify sellers to its marketplace. Growing the marketplace with small and medium businesses, featuring assortments that complement what Walmart already sells, was considered a strategic priority for the mega-retailer.