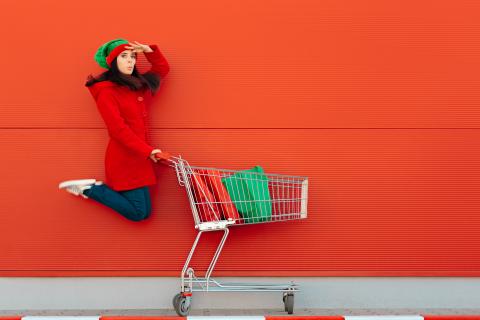 Shipt has expanded its shopper community for the second time in less than two months to prepare for a busy holiday shopping season.

With online holiday shopping this year sure to reach epic proportions, Shipt is adding 50,000 more shoppers -- the term it uses for employees who fulfill customer orders -- to its national network after seeing increased early shopping demand across its business. This is in addition to the 100,000 shoppers Shipt said that it was onboarding nationwide in October.

Adding another 50,000 shoppers to its platform will further help deliver better customer service during this busy holiday shopping season and support continued expansion into new markets and retailers. Over the past six months, Shipt has experienced fast-paced growth, doubling its shopper base, expanding its retailer footprint, and growing its membership and customer base.

In fact, Shipt deliveries grew by nearly 280% in its third quarter of 2020, and same-day order pickup grew by more than 50%.

Shipt is currently looking for shoppers across the country but is focusing on adding thousands of shoppers specifically in Detroit, Grand Rapids, Michigan, Minneapolis/St. Paul, Philadelphia and Pittsburgh.

Earlier in the month, Shipt indicated it was doubling its investment in shopper holiday bonuses to reward its shopper community. The same-day delivery servicewill offer bonuses ranging from $50 to $300, with exact amounts varying by market, but always scaling based on the number of shops completed in the time frame. People who become shoppers over the next few days are eligible forthe company’s holiday cash bonus during Nov. 25-30, as well as any local incentives.

“Shipt shoppers are serving customers with care and making their lives easier during an unprecedented holiday season,” said Kelly Caruso, CEO of the Birmingham, Alabama-based company. “We’re excited to add even more shoppers to the community and reward them for their work in helping American families prepare their celebration feasts, delight their loved ones with gifts, and everything in between.”

Applications are reviewed multiple times a day and can be submitted by visitingwww.shipt.com/-be-a-shopper.

Available to 80% of households in more than 5,000 U.S. cities, Shipt is an independently operated, wholly owned subsidiary of Minneapolis-based Target, operator of more than 1,800 stores, 39 distribution centers and Target.com, and No. 7 on The PG 100, Progressive Grocer’s 2020 list of the top food and consumables retailers in North America. Lyndhurst, New Jersey-based H Mart is No. 81 on PG’s list.