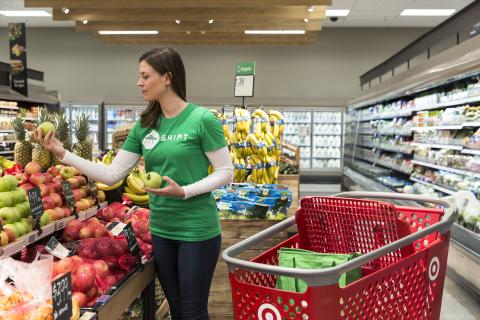 The new hiring push will bring the company's personal shopper base to over 300,000.

Shipt is hiring an additional 100,000 shoppers this holiday season amid unrelenting demand for grocery delivery from the American consumer.

The new hiring push will bring the company's personal shopper base to over 300,000 (rival Instacart has amassed an army of 750,000 shoppers this year.)

"We're embarking on a holiday season like none before, and taking proactive steps to ensure we can help American families get everything on their holiday list -- groceries, essentials, gifts, home decor and apparel -- in a safe, affordable, convenient way," said Shipt CEO Kelly Caruso. "We know that one of Shipt's true differentiators is that we have shoppers who not only know how to shop really well, but also care about their work and their customers. And we know that  families across America need a little bit of holiday help this season. We look forward to welcoming thousands of new shoppers to the Shipt platform this holiday season."

Earlier this year the company announced that it had made shopping through Shipt more accessible than ever by rolling out the ability to pay per order. Thousands of new customers are now shopping through Shipt using this affordable, easy option. In addition, the Shipt $99 annual membership continues to be offered.

In addition, Shipt continues its investments in shopper safety and support, including providing ongoing access to complimentary PPE (masks, gloves and hand sanitizer), and COVID-19 financial relief support for Shipt Shoppers who are temporarily unable to work due to being diagnosed with COVID-19, having a member of their household diagnosed, or are under a mandatory quarantine order.

Over the past six months, Shipt has experienced fast-paced growth, doubling its shopper base, expanding its retailer footprint and growing its membership and customer base. The continued growth of its shopper community will not only help Shipt fulfill the anticipated spike in orders during the holiday season, but will also support growth into new markets and retailers. Today, Shipt shops for nearly 120 retailers across the United States. Recently announced partners in Shipt's multi-vertical offerings include Party City, Bed, Bath & Beyond and buybuy Baby.

Earlier this year, Shipt tested offering non-members the option to try Shipt with one-, three- or five-time passes. The early results showed consumers responded positively to the pay-per-order single use passes and packs. During the test, those passes quickly accounted for the majority of how new users began shopping with Shipt. The company saw a 25% increase in new customers as a result of the pay-per-order offering. Customers have the option to move from a pay-per-order to a subscription model at any time.

"We believe that the future of Shipt is one where our customers and members engage with us in ways that work for them, their needs and their lifestyle," said Caruso. "This expanded suite of delivery rates and options has been a meaningful option for both new customers as well as those that are new to grocery and essential delivery services."

Available to 80% of households in more than 5,000 U.S. cities, Shipt is an independently operated, wholly owned subsidiary of Minneapolis-based Target, operator of more than 1,800 stores, 39 distribution centers and Target.com, and No. 7 on The PG 100, Progressive Grocer’s 2020 list of the top food and consumables retailers in North America.