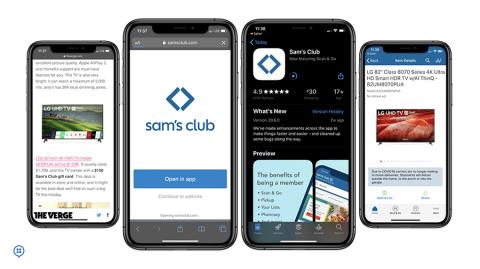 By leveraging Rakuten Advertising’s expansive publisher network and Button’s new deep linking and app-tracking Reach technology, Sam’s Club is among the retailers that have been able to enhance the user experience by seamlessly routing users to apps they’ve already installed, extending the brand experience for loyal shoppers, boosting the usage of its own app and capitalizing on higher conversion rates from in-app shopping sessions.

Sam’s Club can manage partnerships and view app affiliate data from Button on a Rakuten Advertising dashboard. Also, publishers benefit from app payouts without having to update links, while consumers enjoy a shopping experience that moves seamlessly between Rakuten Advertising publisher sites and branded apps.

“Reach has created a major opportunity to utilize the affiliate channel to drive installs,” noted Rick Ton, senior director, marketing at Bentonville, Arkansas-based Sam’s Club, a division of Walmart. “By working with Button and Rakuten Advertising through Reach, affiliate marketing has become a major engine that fuels Sam’s Club’s key mobile initiatives, more than we ever thought it could before.”

“Together, Rakuten Advertising and Button are creating value for our clients by giving them a way to engage with their users in the mobile affiliate space,” said Jeff Wender, chief revenue officer at San Mateo, California-based Rakuten Advertising. “By partnering with Button to create new ways for brands to engage consumers, we’re also helping marketers to deliver on the experience and value that consumers seek.”

“Acquiring new app users has historically been dominated by two channels — Facebook and Google,” observed Michael Jaconi, co-founder and CEO of Button, which has offices in New York, San Francisco and London. “Today, we are shaking things up by offering marketers a new opportunity for driving app acquisition through their affiliate channel with Reach. With app users being three to five times more valuable for retailers, Button and Rakuten Advertising are enabling Sam’s Club to gain more loyal users from their affiliate traffic, and this integration requires no integration work from any parties.”