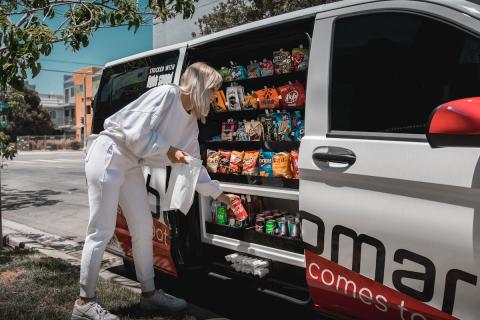 Robomart users can hail a mobile store to come to them, and when it arrives at their house, they open the doors with the app and select their own items.

Robomart, which bills itself as the world’s first store-hailing platform, has officially launched its fleet of on-demand mobile mini-marts in West Hollywood, Calif. The company successfully completed a pilot test in the area last December.

Using the proprietary Robomart app, consumers can hail an automated store on wheels and have it arrive at their location in less than 10 minutes, making it the fastest delivery service currently available, according to the company. For the West Hollywood launch, Robomart has teamed with Miami-based REEF, the largest operator of mobility and logistics hubs and neighborhood kitchens in North America, to manage product stocking, tagging, scanning, integrity and replenishment.

In 2018, Robomart debuted at CES show, at which the company introduced the world’s first self-driving grocery store. Continuing to develop its autonomous technology, Robomart plans to add driverless vehicles to its fleet as regulations allow.

Robomart works kind of like San Francisco-based Uber, in that users can hail a mobile store to come to them, and when it arrives at their house, they open the doors with the app and select their own items. The company notes that it eliminates such pain points as longer delivery times and receiving the wrong items. In the latter case, Robomart enables consumers to view a list of all products in the app before they hail the mobile store, ensuring that shoppers get what they want. The Robomart shopping experience also removes lengthy, time-consuming shopping cart creation and checkout processes with a proprietary RFID-based checkout-free system that lets users take their selected products, put them in a bag and walk off, without physically checking out and paying.

“We’re incredibly excited to launch Robomart in West Hollywood and introduce consumers to the latest innovation in retail,” said Ali Ahmed, co-founder of Santa Monica, Calif.-based Robomart. “In the past decade, online delivery services have grown substantially and filled a need in the market; however, there are still many challenges that make these services undesirable for consumers. With Robomart, we’re disrupting the industry and have received incredible feedback from consumers on how this is the most convenient way to shop – delivering the fastest and most seamless shopping experience – which other delivery services simply can’t offer.”

As part of this initial launch, the company is rolling out two Robomart types: a Pharmacy Robomart offering shampoo, hand sanitizer, ibuprofen and more, which was recently piloted in the area, and a ready-to-eat Snacks Robomart stocked with chocolates, chips, soft drinks and other snack products. The company is still in the development phase with its Grocery Robomart, which will carry fresh fruits and vegetables as well as other refrigerated items. Robomart also plans to expand its fleet to include Pantry, Deli and Café Robomarts in the next few months.

“Robomart is a fantastic partner who will help REEF further connect customers and neighborhoods with greater accessibility, consistency and efficiency to the most in-demand goods and services,” said REEF co-founder Philippe Saint-Just. “Together, we are redefining proximity as a service with our last-block fulfillment infrastructure.”

Robomart has joined forces with other industry leaders, including South San Francisco, Calif.-based Zeeba, its vehicle fleet supplier, and RFID providers Zebra Technologies, based in Lincolnshire, Ill., and Glendale, Calif.-based Avery Dennison, both of which have supported Robomart’s proprietary RFID-tracking technology.