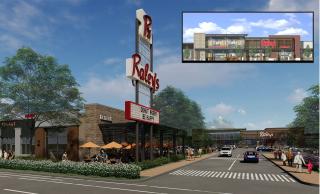 Raley’s recently broke ground on its new flagship store in Sacramento, which is slated to be open in 2020. The new 55,000-square-foot store is a replacement location for a store one block away, which has served the neighborhood for 60 years and will remain open during construction of the new store.

The new flagship store will feature specialized culinary offerings, including an enhanced fresh service counter with acai bowls, sushi, a meat carving station, and a gourmet salad and hot food case. The store will include a tasting room that will offer occasional food tastings, along with beer and wine sampling.

“Raley’s is proud to expand our long-standing relationship with the Land Park community with a modern shopping experience,” said Kevin Konkel, Raley’s COO. “As our flagship location, this store will offer customers something new, while still paying tribute to our strong past in the community.”

To help preserve that history in the community, the original store’s iconic Raley’s monument sign, which was installed in 1958 and resembles the city’s well-known neon signs like Tower Records and Gunther’s Ice Cream, will be moved to the new store. The store also will pay homage to Sacramento’s Capitol Nursery, which had occupied the lot since 1931 by incorporating botanical elements throughout the store and hanging the nursey’s original neon sign within the store.

The store also will feature Loft at the Park, a mezzanine with comfortable seating overlooking the entire store. It will incorporate cozy, contemporary fire pits as well as feature an understated color palette and use raw materials to allow the food to shine.