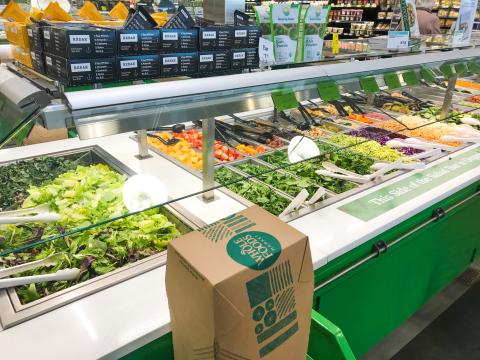 The salad bar and other prepared foods areas of Whole Foods Markets will include dishes made with Lightlife's plant-based chicken.

Plant-based poultry is coming to roost at Whole Foods Markets’ prepared foods departments. The retailer is working with Greenleaf Foods to incorporate plant-based chicken alternatives into its hot bar, cold salad bar and grab-and-go offerings across more than 500 locations in the United States.

The alt-chicken products from Greenleaf’s Lightlife brand are unbreaded cuts made from pea protein created to mimic the taste, color and pull-apart texture of real poultry. Whole Foods will be the first grocer to offer these items.

“Lightlife’s plant-based chicken is a great product to add to our portfolio,” remarked Amy Eubanks, chef and principal program manager of global culinary development at Whole Foods Market. “It’s super tasty and works great as an alternative for chicken. I’m looking forward to the bright future we have with Greenleaf Foods and the innovations they have on the horizon.”

Tommy McDonald, executive chef at Greenleaf Foods, noted that demand is growing for chickens made from plant ingredients. “Chicken is the most popular animal protein in the U.S. because it can be used in a wide variety of different dishes,” he said. “This product performs well in hot or cold food applications, and one of my favorite dishes is the new Whole Foods Market Classic Vegan-Chicken Salad.”

Earlier this year, Lightlife launched a line of breaded plant-based chicken tenders and filets in grocery stores. The items are designed to be merchandised in the fresh meat case adjacent to traditional chicken meat.

Austin, Texas-based Whole Foods has more than 500 stores in the United States, Canada and the United Kingdom. The grocer is No. 26 on The PG 100 list, Progressive Grocer’s 2021 list of the top food and consumables retailers in North America, while Whole Foods' parent company, Seattle-based Amazon, is No. 2 on PG’s list.