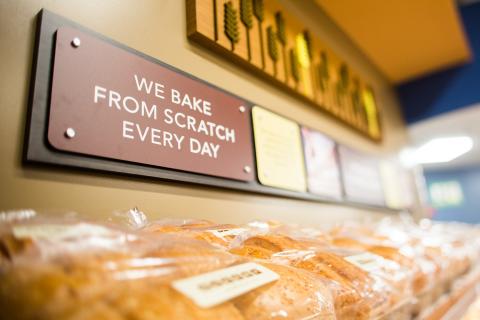 Shoppers at the new Publix in Myrtle Beach, S.C., can enjoy breads and rolls baked fresh every day.

Publix Super Markets continues to expand its operations in the popular vacation spot of Myrtle Beach, S.C. The Southeast grocer opened its newest store in the area at 955 Wood Duck Drive near South Strand Medical Center. The 46,811-square-foot store is an anchor tenant of Coventry Marketplace and is the second Publix store to open in Myrtle Beach in November. The food retailer opened a 46,791-square-foot store on Nov. 2 at The Marketplace at the Mill, which is located at 136 Sapwood Road.

The city of Myrtle Beach is a residential and vacation community at the heart of South Carolina’s Grand Strand coast, a 60-mile string of beaches. Millions of vacationers visit Myrtle Beach every year, with an estimated 37,000 permanent residents calling the area home.

The two November store openings join other Myrtle Beach locations at the Village Shops at Grande Dunes and at Forest Square, as well as at Coastal North Town Center in North Myrtle Beach. Additionally, there are two Publix stores in nearby Murrells Inlet and Pawleys Island.

In the month of November, Publix opened a total of six stores in South Carolina, Florida and Alabama.

Amid its store growth, Publix has noted that its recent third quarter had been “a difficult time," reporting a mixed performance during the three-month period ending Sept. 24.

The food retailer shared in its third-quarter earnings report that it was weathering marketplace cross-currents in addition to recently navigating its operations through a destructive hurricane.

Publix disclosed that its third-quarter sales reached $13 billion, up 9.2% from the same period in 2021. Comp sales rose 7.6% during the summer and into early fall. Total sales for the first nine months of 2022 closed in on $40 billion for a 10.7% year-over-year gain.

Meanwhile, Publix’s net earnings for the third quarter dropped 54%, down from $856.9 million in 2021 to $394.1 million. The grocer reported that net earnings would have been $808.9 million for the quarter, if the impact of net unrealized losses on equity securities this year and net unrealized gains in equity securities in 2021 were excluded. For the calendar year to date, net earnings came in at $1.6 billion, versus $3.4 billion in 2021.

Employee-owned and -operated Publix has close to 1,300 supermarkets in Florida, Georgia, Alabama, South Carolina, Tennessee, North Carolina and Virginia. Publix is also moving forward in expanding its footprint into Kentucky. The company is No. 12 on The PG 100, Progressive Grocer’s 2022 list of the top food and consumables retailers in North America.