The ability for grocers and their service providers to be adaptive moved front and center as the coronavirus hit the United States in full force. President Donald Trump declared a national emergency on March 13, and almost instantaneously, shoppers flooded grocery stores to stock up on everything from toilet paper to pantry staples.

As social distancing and stay-at-home orders turned into the new normal, food retailers were catapulted into a position of needing to keep their employees and customers safe, all the while providing an essential service.

A domino effect of grocers instituting one-way aisles and 6-foot markers started the wave, and soon occupancy rules followed. At the beginning of April, the governor’s orders in Connecticut limited occupancy to 50%, while orders in Massachusetts mandated a maximum of 40% capacity.

A number of other states have followed suit, and even more retailers have assumed the responsibility themselves, either allowing a certain number of customers per square foot or a certain percentage of their fire code occupancy.

Pen-and-paper solutions could quickly be implemented, but their shortcomings were no surprise. Grocers would have to pay a staff member, who could be used elsewhere for additional sanitation protocols, to stand at the door, making tally marks as people come and go. A shift change or need for a break could quickly lead to an inaccurate count, customers had no idea how long of a wait they would have, and only one entrance could be open at any given time.

“With the outbreak of COVID-19, the retail landscape completely changed, probably forever,” asserts Mike Slevin, global sales and marketing director of U.K.-based Irisys. “A lot of the steps that retailers took originally around things like putting up barriers or markings on the floor help to a certain extent, but they’re now moving to the phase where they recognize the more long-term issue, and they want to put in place processes, procedures, technology.”

Irisys quickly leveraged its 20-plus years of experience in the retail analytics space, working with brands like Cincinnati-based Kroger, to create a product tailored specifically to the needs of food retailers in the age of the coronavirus. SafeCount was born, employing time-of-flight sensors, which use infrared light, to accurately determine the number of people entering and leaving a store.

An advantage of SafeCount is its easy installation, a fully stand-alone system using Irisys’s Vector 4D sensor, which runs with the software locally embedded on it and can be connected to a standard WiFi access point and any other browser-enabled devices.

Installation is quick regardless of whether you’d already been working with the company — like Kroger.

“Where Kroger was quite forward-thinking, what we’re now seeing is other food retailers starting to recognize the importance of that data,” Slevin says. “Kroger was able to respond very, very quickly to the COVID-19 pandemic. Kroger was able to actually start understanding occupancy information from their stores in less than six days from when they originally came up with the request across 2,300 stores.

“That demonstrates the fact that these mega-brands can still be agile if they deploy the right technology,” he adds.

Youngstown, Ohio-based SenSource also started noticing an uptick in interest from grocers as the COVID-19 situation developed. The company had dabbled in occupancy counting in the past, but not as much in real time, according to Andy Clutter, SenSource’s marketing director. 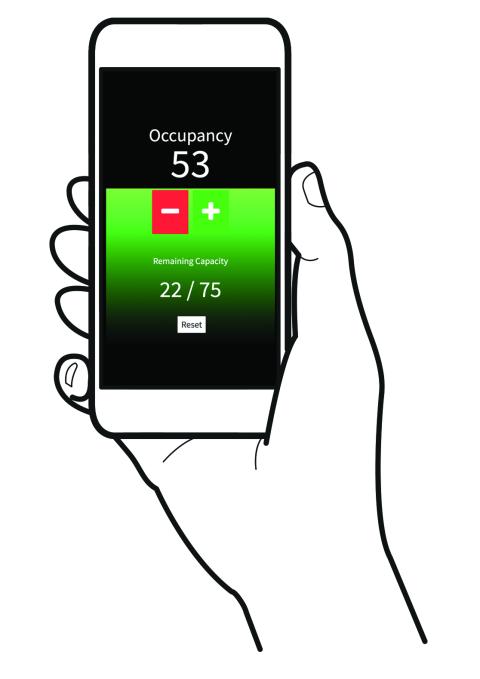 SafeSpace has a manual counting option using a smartphone or tablet such as this one, or an automated option using sensors.

SenSource saw the opportunity for its expertise and ability to move quickly, creating its new SafeSpace solution with both a manual counting option using a smartphone or tablet and an automated option using the company’s bread-and-butter sensors.

The manual solution requires an employee to click when a customer enters or leaves the store, but it can combine data from multiple employees and multiple doorways. This manual option can be set up in mere hours.

“A lot of grocers don’t want to maintain that model of manual counting long-term, so we’re basically planning on implementing sensors, but it may be in two or three weeks from now,” says Dan Aluise, SenSource’s sales manager. “A lot of these chains are willing to make that investment knowing that they don’t want a person standing out in front with a pen and a paper for the next 18 months to track people when it can be automated.”

Both the manual and automated solutions have the option of displaying occupancy data on consumer-facing monitors at the doorways to signify how many people are inside, whether occupancy is low or whether they’ll have to wait to enter. If the number of people allowed in the store changes, either by government mandate or the store’s discretion, that’s also an easy change.

“You can go into the admin panel and change what your max occupancy is at any time,” Aluise explains. “If a regulation comes out at 10:00 a.m., by 10:05, the regulation limit can be implemented into the system.”

Both Irisys’ SafeCount and SenSource’s SafeSpace offer analytics platforms to dive deep into occupancy data on a store-level or company-wide basis and demonstrate adherence to any government mandates. These analytics platforms, however, can accomplish a lot more, too.

Monitoring store occupancy is a pretty straightforward demand, but as retailers make investments in sensor technology, the benefits can far outlive the requirements of the COVID-19 pandemic.

Once retailers start to understand footfall, conversion and peak occupancy hours, a number of other questions come to mind: How can you align staffing and labor?  How can you lay out your store better to accommodate different behaviors? How can you ensure a sufficient number of carts or baskets are available for shoppers?

“We do a lot of in-store analytics projects, where the same sensing technology can be used to do things like understand browse time, understand customer engagement with staff or with merchandise,” says Slevin. “We can look at things like providing real-time and location data of staff versus customers, wait times in lines, or dwell times at product displays.” 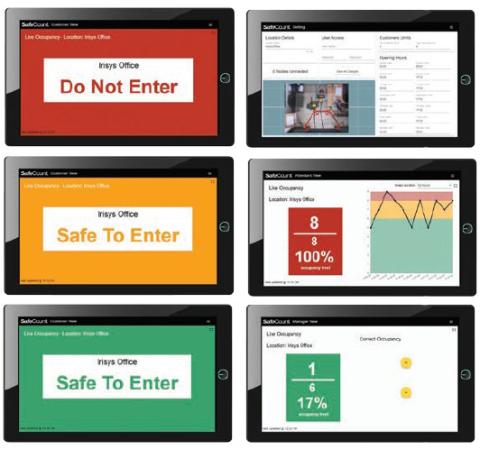 The SafeCount solution by Irisys offers both customer-facing and manger-facing interfaces with real-time store occupancy data.

Kroger has been working with Irisys for more than a decade now, employing its branded QueVision solution to dramatically reduce wait times in checkout lines.

SenSource’s service-intensity metric takes into account the number of shoppers per the number of employees who are on the clock. Looking at sales dollars and labor dollars, the system can predict what type of staffing needs the store will have during certain times and on certain days.

“It starts learning trends of each hour of the day, looking at the occupancy and number of shoppers that enter and exit the store,” Aluise says. “After this is in place for two weeks — even better if it’s in place for two months — it’s a little bit more of a pure forecast. It’ll forecast the next 90 days, and it’ll tell the user, say a store manager, what our system recommends for staffing based on that forecast.”

Irisys uses a proprietary technology within lanyards that staff members wear around their necks to better understand their actions and how well they align with the store’s goals.

“It’s highly, highly reliable, but then saying that, very passive,” Slevin notes. “There is no active involvement from any staff, and no sort of privacy concerns. It’s a very neutral lanyard; it won’t tell which member of staff is which. It will just tell you this is a member of staff.”

This system can distinguish staff from customers to exclude them from occupancy counts and improve customer experience. For example, if the system says that it needs eight checkout lanes open in the next 15 minutes, the retailer can use staff detection to see whether the store actually conforms to that.

According to Slevin, staff detection plays a huge role in efficiency as well. Irisys is currently working on a project with self-checkouts to determine how retailers can put the right number of staff in the area to assist customers as quickly as possible. The company is also looking at baggers by monitoring their presence at the ends of lanes to make sure that there’s somebody there to actually speed up the bagging process.

Privacy concerns are also a nonissue with Irisys, because time-of-flight sensors don’t use video to detect people.

“We don’t identify customers, so there’s no concern over privacy,”  Slevin affirms. “The same with staff — they’re not spying on staff. It’s all generic. It’s all anonymized.”

The technology, however, does have an additional advantage for segmenting adult shoppers from children.

“We are able to very, very accurately, to plus or minus 2 centimeters [0.79 inches], determine the height of individuals within the field of view,” Slevin says. “We can provide things like histograms showing what proportion of your customer base is segmented into those different sorts of height ranges, which you can then roughly equate with different age groups.”

Some state regulations have excluded children from counting in occupancy limits, while others haven’t. Either way, the data can be beneficial for understanding customer engagement in the long term.

As the industry scrambles to make changes needed in the current COVID-19 environment, eyes can’t focus simply on temporary fixes. Sensor technologies can promise everything from occupancy counting to customer engagement, and staff management to operational efficiencies. The solutions to today’s challenges can become the platforms for future success.