As the COVID-19 outbreak in the United States gained steam in March, Amazon, Walmart and Target suddenly announced that they would be hiring hundreds of thousands of new workers.

Soon thereafter, Dollar General made a direct hiring appeal to people (restaurant and hotel employees, among others) who are losing their jobs as a result of the pandemic.

The Kroger Co. then followed suit, announcing that it would be hiring at least 10,000 new workers, as well as handing out bonuses and boosting sick leave for its employees. 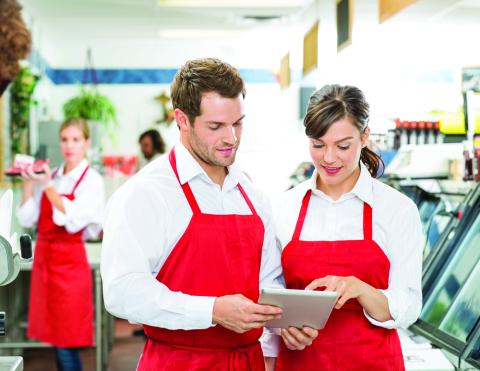 Skyrocketing demand for groceries during a public health crisis has created an immediate need for more workers, forcing many of America’s grocers to scramble when it comes to reinforcing their ranks. There likely has never been a more challenging time for food retailers when it comes to the hiring, retention and training of workers in this country. And food retailers might have to alter their hiring practices to ensure that their stores — both brick-and-mortar and online — are staffed to meet the overwhelming demand.

Two of North America’s most successful regional grocery chains — Heinen’s, in Cleveland, Ohio, and Longo’s, in Toronto — have been making the kinds of investments in labor, training and development that are poised to pay big dividends during this unprecedented time for grocery labor. Even before the pandemic, both retailers were focusing on the key factors driving workforce innovation in food retailing, namely:

Ahead of the Curve

“E-commerce is definitely blowing up for us right now, and it’s blowing up in the industry,” says Tom Rudar, human resources/training and development specialist at Heinen’s. “A couple of years ago, we started working with Instacart, and it’s been pretty successful for us. Now we are also doing curbside pickup, we’re redesigning our website, and we’re actually going to have a mobile app. They’re both coming out this year.” 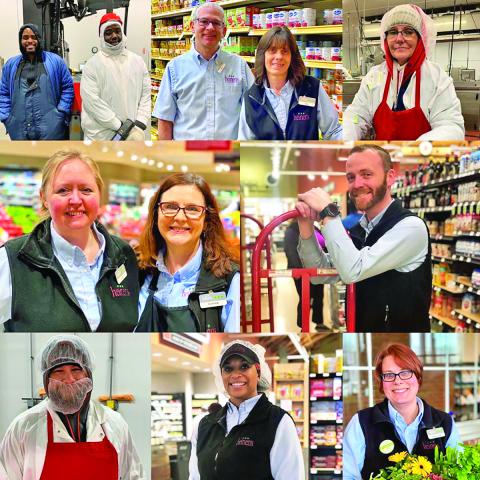 Family-owned grocery chain Heinen's, which has been ramping up investments in labor technology, seems to be well positioned for a hiring crush of new workers amid the COVID-19 pandemic.

Heinen’s, which has 23 stores in Ohio and Illinois, actually launched grocery delivery 20 years ago, “when nobody was doing it,” as Rudar puts it

“We had a service called Speedy Shopper,” he recounts. “Customers could go to a website, order items, and then we would pick the orders and ring them up. And then a third party would come and pick them up and deliver them to the customers. We stopped doing it for a little while, and then we got into Instacart.”

Today, Heinen’s has associates who work both for the retailer and for Instacart. So far, that arrangement has worked out well for both companies.

The family-owned grocery chain, which has been ramping up investments in labor technology, seems to be well positioned for a hiring crush of new workers.

“We had over 25% of new associates leave in the first 90 days last year,” Rudar says in an interview conducted before the COVID-19 outbreak. “That was really high for us. So we’ve gotten really creative with doing job fairs and going out and helping the stores with their hiring, because they just don’t have enough people to be on-site and hire for some of the needs that they have.”

To meet staffing needs, Heinen’s is rolling out new job descriptions for each vacancy, a social media strategy and a new applicant-tracking system.

“It’s taking about 60 minutes for someone to apply for a position at our company,” says Rudar. “So with TalentReef, our new ATS [applicant-tracking system], it will take as little as five minutes. We’re excited to kick off that new system soon.”

Meanwhile, training continues to evolve at Heinen’s, which is taking new approaches to equipping associates with the knowledge they need to effectively serve shoppers and grow within the organization.

“We’ve made a lot of adjustments with labor,” notes Rudar. “We’ve used a tool called Logile for a couple of years, and we have made some adjustments to being more appropriately scheduled at the right times. Some departments have been easier than others.”

The majority of Heinen’s tech investment has happened in just the past two years.

“From using Axonify to using Logile to computer-assisted ordering, we’re helping our people make decisions to help customers and make sure we have product when we need it and staff when we need it,” asserts Rudar. 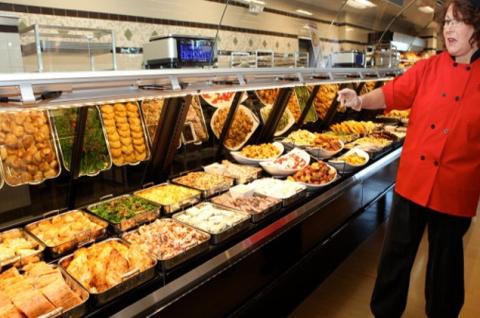 A Heinen's Red Coat at work on the prepared foods case

Before Heinen’s teamed up with Waterloo, Ontario-based Axonify, Rudar says that he and his colleagues were spending more than 700 hours a year training employees in a classroom setting. Now the grocer has embraced Axonify’s micro learning solution to give employees quick access to knowledge and information.

“Two years ago, we knew we had to make a change,” he says. “We were doing a lot of classroom training. Axonify has been a game-changer for us. Our people were a little skeptical at first, but they have loved it. They’re talking about the learning that they’re getting. They’re giving us ideas for learning going forward.  We rolled it out to a couple of departments at a time last year, and it was so successful that our operations team came back to us and said, ‘We need this everywhere, as fast as you can.’ So our plan is to roll it out everywhere this year.”

As a grocer where prepared foods accounts for nearly 20% of its business, Heinen’s has been focused on leveraging Axonify’s training tool to aid in the transformation going on in that department, according to Rudar.

“We’ve done a couple of things that require a little bit more labor in prepared foods,” he explains. “We have a person who acts almost like a concierge. We call them a Red Coat, and they are there on the prepared foods case during the prime hours of the day to sell food out of that case. They answer questions, help customers, etc. And we even took that to another level in some of our stores. We call it ‘Meals and snacks, mix and match.’ We’re taking that person that’s behind the counter, and we’re moving them out to the sales floor. We’re allocating 12 hours a week for that person to be on the sales floor and interact with the customers around the solutions in that packaged case area.” 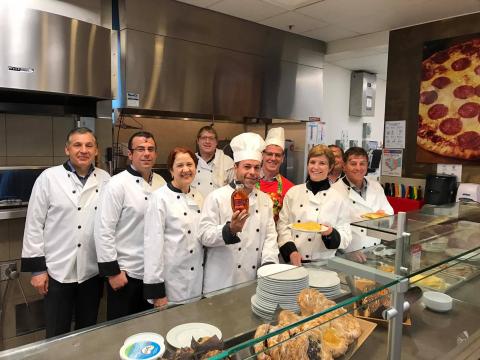 Toronto-based Longo's has been leveraging technology to optimizing its hiring and training processes.

For Canadian grocer Longo’s, the role of the front-line store associate has evolved as retailers’ approaches to serving shoppers has shifted to include an emphasis on prepared foods, digital initiatives and omnichannel fulfillment.

Carol Henry, director of human resources at Longo’s, has been closely involved in the grocer’s training and retention strategies for these workers, and its efforts to get technology into the hands of the front-line employees who need it.

“The biggest challenge now in grocery labor is that everything is about speed,” admits Henry. “So, for example, it used to be that whenever we opened new stores, people lined up around the block to apply for a job. Fast-forward to this year, when we opened three stores, and there was a real challenge in hiring people. Yes, there’s a lot more competition; yes, there’s a lot more people getting into the grocery retail space, but a challenge is the concept of speed. We did some job fairs, and we started to notice that other retailers were hiring people on the spot, instead of doing second or third interviews later.”

Longo’s, which operates more than 35 stores in the Toronto and Hamilton, Ontario, areas, is leveraging technology to make hiring employees faster, and to make it easier for employees to receive training.

“We started changing our approach to say, hey, you know, probably we need to just really screen a little bit faster,” notes Henry. “[We would] stick to our values but at the same time probably [make] that offer a little bit faster, and then just [learn] as we go. So that’s been one of the biggest challenges.”

According to Henry, the grocery chain has also partnered with Axonify to leverage the company’s unique approach to micro learning as a solution for the modern retail workforce.

“We have reimagined our department manager training program,” she says. “We used to bring people in for about three to four months, about 14 in-class sessions. We’ve actually scaled that back to about four to eight in-class sessions and about 10 online sessions. We’re using Axonify to help with that.”

The Axonify platform is mobile-enabled, so Longo’s can have training programs tailored to how people live now: on their mobile phones.

“Our partnership with Axonify is just shy of a year old, and our team members are using it every day,” notes Henry. “Our participation is almost 85% on a daily basis. We have our distribution center hit 100%, which is huge for us.”

Longo’s has been employing the platform to train employees on its new private label program.

“We used Axonify to help team members understand the attributes of the products, how they should engage with guests, etc.,” explains Henry. “So just the ability to get training in the hands of people really quickly was great."

Longo’s has also been trying new strategies when it comes to job sites such as LinkedIn. Additionally, the grocery chain has ramped up employee benefits, including offering scholarships for team members, comprehensive health benefits, a mental health program, tuition reimbursements and lots of discounts.