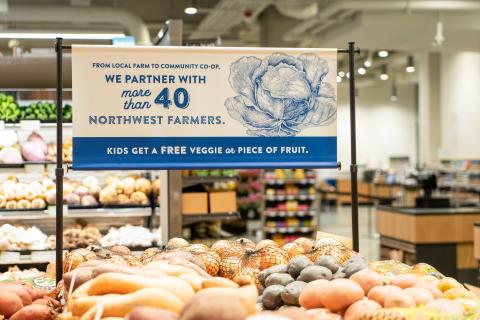 In 2021, PCC Community Markets offered more than 9,000 local products in stores, according to its annual “Co-op Purposes Report.”

PCC Community Markets (PCC), the largest community-owned food market in the United States, has released its annual “Co-op Purposes Report,” which found that membership grew by 13% in 2021 to more than 102,000 members by year’s end. The report lays out the grocer’s progress on its goals in various areas.

“After a second full year of social, economic and environmental upheaval stemming from the global pandemic and persistent societal inequities, it is comforting to reflect on the common purpose that unites our co-op: PCC’s vision to inspire and advance the health and well-being of people, their communities and our planet,” noted Krish Srinivasan, PCC’s recently appointed CEO, in a letter at the beginning of the report. “I am deeply committed to transparency with our staff and members. Our ‘Co-op Purposes Report’ is one element of that work that is in service to our members, providing an overview of our collected mission-related work, accomplishments and impact in 2021.”

In keeping with PCC’s  triple-bottom-line operating model that balances environmental, social and economic goals while reducing environmental impacts and giving back to its community, the report highlighted the following accomplishments and work in progress:

The co-op also reported that in 2021, it gave more than 65% of its pre-tax earnings to members and the communities it serves. This includes the member dividend and support of such local nonprofits as Ventures, Washington Farmland Trust and FareStart.