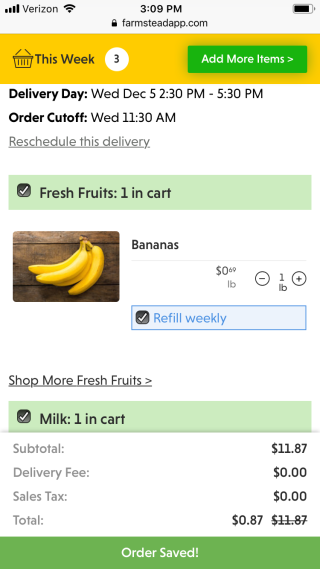 Farmstead's move to a new, larger microhub has enabled it to expand its delivery radius in California's Bay Area.

Farmstead’s recent relocation to a new, much larger microhub space, in Burlingame, California, made its delivery expansion possible. The space is six times bigger than Farmstead’s previous microhub, in San Francisco, and allows the company to deliver groceries to tens of thousands of Bay Area households weekly.

“Farmstead’s mission is to make fresh, high-quality food accessible to everyone,” noted Pradeep Elankumaran, CEO and co-founder of the San Francisco-based company. “We’ve had thousands of requests from potential customers in the broader Bay Area, both before and during the pandemic. Until now, neighborhoods east of the Diablo mountain range have lacked an online grocer that offers both local and national brands, at better prices than local supermarkets, with free delivery and a subscription option. We’re thrilled to bring Farmstead to over half a million more Bay Area households.”

Farmstead’s proprietary AI-based software, linked to smaller-format warehouses, helps determine optimal inventory levels, ensure efficient order picking/packing/delivery, and reduce food waste by six times compared with grocery stores, according to the company, which adds that these efficiencies enable it to charge no delivery fees while keeping prices lower than those of local supermarkets.